Jang Nara left a post on her Instagram describing her thoughts on the groundless wedding rumor with Kim Nam Gil.

She wrote the following message:

This is not an explanation or an excuse.

A groundless post written by someone was regarded the truth overnight, and it continues to be talked about. I feel like I’m being ridiculed without any reason or grounds. I’m afraid that something like this could happen again and again in the future.

It is not true.

I have never seen him personally, and I don’t know his contact details.

Kim Nam Gil, Jang Nara, and Dispatch have all released statements denying a rumor that quickly began spreading about the two actors supposedly tying the knot.

During the early hours of August 5, a rumor began to quickly spread online that Kim Nam Gil and Jang Nara would be getting married in November after seven years of dating. A post was made on an online community showing what was claimed to be a screenshot of a Dispatch article about the news that the poster said was quickly deleted from the site.

Both actors and Dispatch quickly denied the rumors and stated that the incident was a hoax. Dispatch took to their Facebook page to write, “The photo being circulated of our outlet reporting on Kim Nam Gil and Jang Nara’s wedding is doctored. Somebody took a screenshot of our homepage and photoshopped the photos and fake article title. We hope there are no misunderstandings. We have no knowledge regarding the relationship or wedding plans of the two actors.”

The photo in question was a screenshot of the main homepage of Dispatch that had photos of the two actors with the article title “Exclusive: Talented actor Kim Nam Gil and youthful beauty Jang Nara to get married in November after seven years of dating.” However, the photo of Jang Nara that was used in the screenshot was taken from a different media outlet, whose watermark can be seen on the photo. 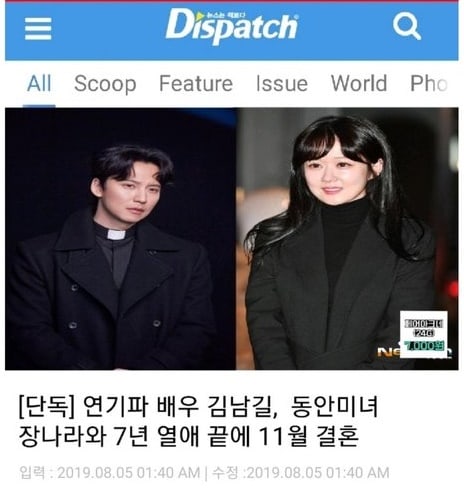 Both Kim Nam Gil and Jang Nara’s agencies have quickly denied the rumors as well. Kim Nam Gil’s agency C-JeS Entertainment stated, “We believe this was a malicious and baseless screenshot. We will find the original creator of the rumor and take strong legal action.” Jang Nara’s agency also denied the rumors and said, “It’s completely false. She is currently focused on filming her new drama ‘VIP,’ which will premiere in October.”

This is the second time Kim Nam Gil and Jang Nara have been swept up in dating rumors. In 2013, Kim Nam Gil paid for a support truck to go to the set of Jang Nara’s next project after she won an acting award for her role in “School 2013,” prompting the rumors that both sides denied at the time.

Jang Nara
Kim Nam Gil
Dispatch
How does this article make you feel?