Lee Yi Kyung and the producing director (PD) of tvN’s “Player” responded to reports that the actor and Lee Guk Joo are dating, which were due to a misunderstanding.

On the August 4 episode of the variety show, Lee Soo Geun, Lee Jin Ho, Hwang Jae Sung, Lee Yi Kyung, Jung Hyuk, Kim Dong Hyun, and Lee Yong Jin played a game where they had to speak at a pretend press conference. When they talked, they had to avoid saying the members’ names as well as the words “no,” “I don’t know,” “so,” and “I” or they would be sprayed by a water cannon.

One reporter asked Lee Yi Kyung, “You were recently spotted coming out of Lee Guk Joo’s home at dawn. Do you have thoughts about dating publicly?” Talking amongst themselves, the other members said, “We have to be idols.”

He then surprised everyone by jokingly adding, “I’m sorry. I’ll accept it. Love isn’t a sin.” Lee Yi Kyung joked about a fake relationship between himself and his best friend Lee Guk Joo in order to avoid the water cannon.

After the show aired, media outlets reported on Lee Yi Kyung’s “confession.” While viewers who watched the show had laughed during the funny scene, there were many people who read the articles assuming it was said in a serious way because they lacked context. 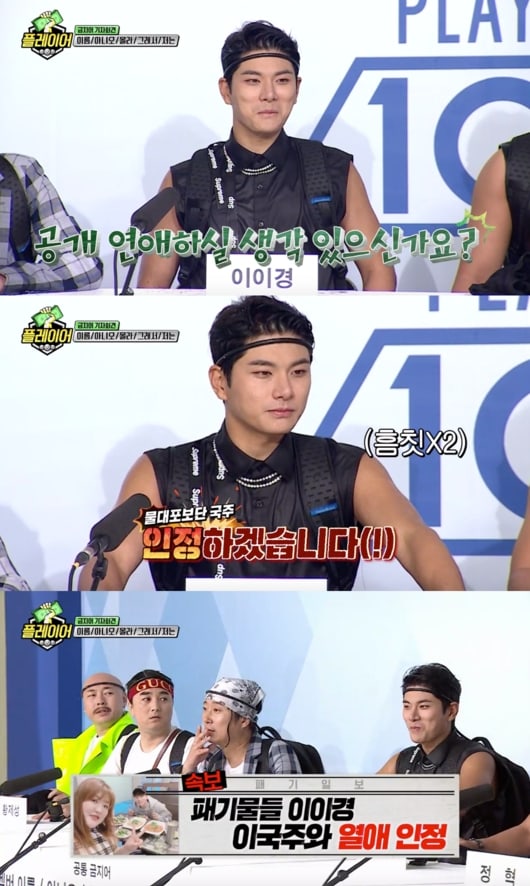 The PD added, “Lee Yi Kyung and Lee Guk Joo are close male and female friends. I hope you won’t misunderstand it.”

On the same day, a source from Lee Yi Kyung’s agency HB Entertainment told Newsen, “Lee Yi Kyung confirmed he was dating Lee Guk Joo on ‘Player’ because of the flow of the show created by the other members and to avoid the penalty. It was a scenario where he would have to get hit with a penalty of the water cannon if he said a name.”

They continued, “He confirmed the dating rumor in order to avoid the punishment due to the nature of the show, but they’re not dating. They just have a close older sister and younger brother relationship.”

Lee Yi Kyung and Lee Guk Joo’s close friendship is well-known amongst fans. In the past, she posted a selfie on Instagram of them eating together with the caption, “Passionate man Lee Yi Kyung. Met through the radio. Brotherly relationship.”

“Player” is a program where the cast has to solve a mission and survive a “laugh trap” at a different location every week. If the cast can’t stop themselves from laughing, they receive a punishment and a cut in their appearance fee. The show airs on Sundays at tvN at 6:15 p.m. KST.