The “Produce 101 Season 2” project group Wanna One made their debut on August 7, 2017 with their title track “Energetic.” Their time together was short but sweet, as they achieved huge success and a large fanbase both domestically and around the world. Wanna One’s contracts ended on December 31, 2018 and their last official activities together were their final concerts in January of this year.

While the 11 members have since made their debuts as solo artists, in new groups, as actors, and more, their moments together as Wanna One will live on as precious memories for the group and their fans. On August 7 of this year, Wannable trended the hashtags #우리워너원_이주년_축하해 (“Happy 2nd anniversary, our Wanna One”) and #TwoYearsWithWannaOne to celebrate the special day. 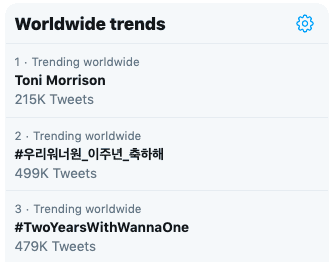 Relive many of the beautiful memories and feel the love through fans’ tweets below!

time do really flies so fast, it's been 2 years and its been wonderful. Will be here for another year too, Wanna One forever! ∞#우리워너원_이주년_축하해#TwoYearsWithWannaOnepic.twitter.com/0o2jk5CSmn

we went really far from

"up until today, the time that we've spend together, 491 days and 11784 hours… thank you for being our fan, can you trust & wait for us?" #우리워너원_이주년_축하해 #TwoYearsWithWannaOne

youre probably the weirdest group who play mafia at award shows & find joy in the smallest things like pranking each other,
but i guess thats what makes the 11 of you even more precious & harder to live without. happy 2 years.??#우리워너원_이주년_축하해#TwoYearsWithWannaOne pic.twitter.com/bO5VwAagWW

To our best boys,

We are proud of what y’all have become. Whether you’re a soloist, in a new group, an actor, a new breed of musical actors we will always support you! Thank you for being Wanna One I couldn’t ask for more. ? #우리워너원_이주년_축하해#TwoYearsWithWannaOne pic.twitter.com/TA3GmJ0x8D

Happy anniversary to Wanna One!