On the August 8 broadcast of MBC’s “Section TV,” the behind-the-scenes story about Kang Daniel and Jihyo’s dating news was discussed.

On August 5, Dispatch published an article revealing that the two idols met once a week despite their busy schedules. The reporter behind this exclusive report said, “Because both of them are idols, it was difficult for them to date in public. It looks as if they met carefully while being watchful of others. Since Jihyo lives in the dorm, they had a date once a week at Kang Daniel’s home.”

Once the article went live, some observant readers noticed that the date on it showed that it was written on July 20.

One of the Dispatch reporters behind the report spoke to “Section TV” about this. They stated, “July 20 was when we completely finished investigating the report. We wanted to take Kang Daniel’s comeback into consideration and thought that we should avoid the week of his comeback, so we planned for August 1. But Kang Daniel’s fan meeting was on August 1. The next day, August 2, was when it was reported that Japan had removed Korea from the white list. Since we avoided Friday, the day it was scheduled was Monday [August 5].” 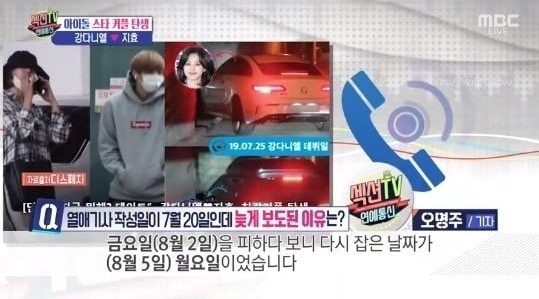 Both Kang Daniel and Jihyo’s agencies confirmed the dating report, and he posted a letter to his fans on the same day.