tvN’s “Three Meals a Day” has returned for a new season with a strong start!

The first episode of the new season aired on August 9 and according to statistics released by Nielsen Korea, the episode garnered average nationwide viewership ratings of 7.2 percent across cable, IPTV, and satellite platforms, peaking at 10.3 percent. In the 2049 age bracket, they recorded ratings of 4.8 percent and peaked at 6.4 percent, taking the top spot in its time slot across all channels.

The new season comes with changes as, for the first time, an all-female cast of Yum Jung Ah, Yoon Se Ah, and Park So Dam set off to live off the land. With the promise to go back to their roots, the show follows the trio as they head to the mountainside village in Gangwon Province. 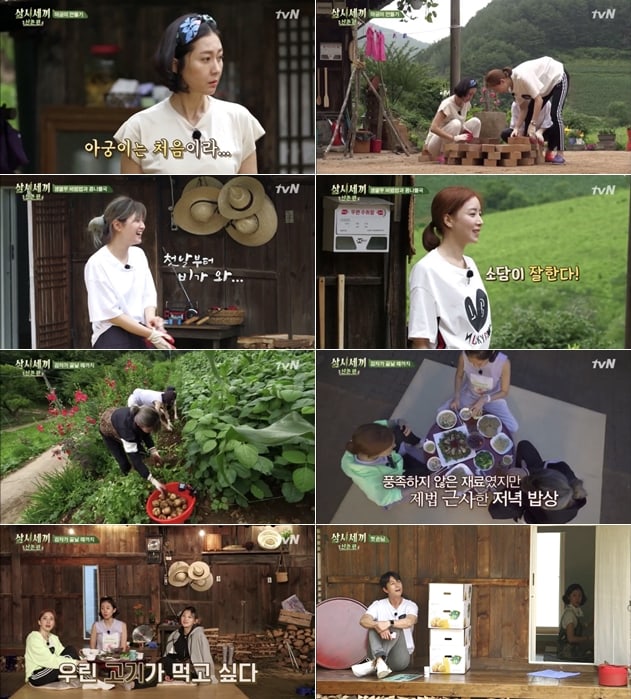 The three actresses experienced their first day in the village, cooking up delicious meals with the ingredients they had. Yum Jung Ah, the oldest of the three, constantly stayed busy to take care of the others, while Yoon Se Ah brought a positive energy that kept everyone happy. Park So Dam had spent much of her childhood helping her grandmother care for her vegetable garden so she had no trouble setting up a fire and digging up ingredients. Viewers were warmed by the sisterly bond that quickly formed between them.

The end of the episode also brought a guest appearance by Jung Woo Sung, who was visiting to show his support for the three actresses. He is expected to help make everything easier for the group as they all work together to create delicious meals and enjoy time in the countryside.