4 Lines From “Moments Of 18” That Tugged At Our Hearts

JTBC’s Monday-Tuesday drama “Moments of 18” continues to warm the hearts of viewers with its story of the bittersweet coming-of-age of its two main characters, Choi Jun Woo (played by Ong Seong Wu) and Yoo Soo Bin (played by Kim Hyang Gi). For adults, the drama brings up wistful memories of youth, while it draws deep empathy and excitement for those who are just passing 18 years of age. 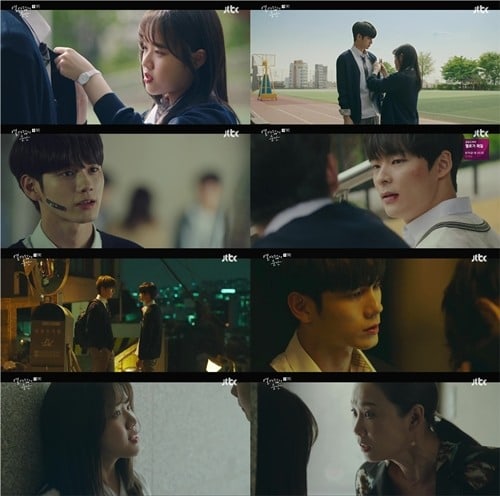 Here are four lines from “Moments of 18” that tugged at our hearts as the characters experienced both the beauty and the pain of growing up:

Yoo Soo Bin: “Doesn’t it frustrate you? Living without a presence.”

Choi Jun Woo is forced to transfer schools after taking the blame for an incident for a friend, and starting his new school life under misunderstanding and judgment is not easy. The only person who believes in him after he is accused of stealing a watch is Yoo Soo Bin. She continues to worry about him as he goes on with his life being called by different names.

While tearing off his incorrect name tag and throwing it far away, Soo Bin says frankly to Jun Woo, “Doesn’t it frustrate you? Living without a presence.” She then creates a new tag with his real name. In a subdued tone, Jun Woo says, “Do I really need a presence? Ever since I was born, I don’t think I had such a thing,” making everyone’s hearts ache. This interaction between the lonely boy Choi Jun Woo, who closed his heart off to others, and Yoo Soo Bin, who knocked on his heart, sets off a change in both that made for a warm and heart-fluttering first episode.

Choi Jun Woo experiences happiness for the first time after meeting Yoo Soo Bin, but for his friend who he left behind, Jung Hoo (played by Song Geon Hee), his life becomes more twisted.

After Jung Hoo is attacked by the bullies of Byungmun High School, Jun Woo rushes in to save him, and they run away together. Upon seeing Jun Woo’s makeshift name tag, Jung Hoo says, “Do you think something has changed after walking around with that? Not at all. Because our lives were messed up from the start.”

Later, Jun Woo cheers Jung Hoo on by saying, “Our lives aren’t messed up. What’s wrong with being born a bit twisted? We can just untangle it ourselves.” Although these words are directed to Jung Hoo, they soon provide comfort to Jun Woo himself and to others. It further strikes an emotional chord with viewers as it becomes the last parting words between the two before Jung Hoo meets his unfortunate death.

Choi Jun Woo learns that Gi Tae (played by Lee Seung Min) gathered the bullies of Byungmun High School to drive him out of school and ended up making Jung Hoo leave instead. Jun Woo confronts Gi Tae outside his house and provokes him by saying, “Do you think Ma Hwi Young will be loyal to you if you protect him?” Gi Tae fearfully responds, “Your life might already be ruined, but mine isn’t,” and even gets on his knees.

Jun Woo brings Gi Tae to his feet and says, “There’s no such thing as an ‘already ruined’ life. We’re only 18. You, me, and Jung Hoo.” Jun Woo drew deep sympathy for his calm speech despite his rising anger.

Yoo Soo Bin: “Did you give birth to me to show me off to other people?”

Kim Hyang Gi continues to shine in episode 5 after receiving a warm response for her acting since the first broadcast. In this episode, her character Yoo Soo Bin decides to quit the special math class that her ambitious mother (played by Kim Sun Young) went to great lengths to put her in. Learning of this, Soo Bin’s mother finds her at school.

Soo Bin expresses her embarrassment at being suddenly pulled out of class, and her mother replies, “I’m embarrassed by you! I can’t show my face at my college reunions because of you.” Soo Bin begins to cry as she angrily responds, “Did you get married so you could go to college reunions? Did you give birth to me to show me off to other people?”

This instance of parents overly emphasizing education out of wanting the best for their children and the children following this set standard as if it is the answer to life does not exist only in Soo Bin’s family. As the drama continues to draw empathy for the real stories of these ordinary characters, viewers are curious to see if Soo Bin can succeed in standing on her own two feet.

A producer for the drama stated, “We are providing warm empathy and comfort through the bittersweet story of the growth of these 18-year-old youths as they soothe each other’s pain. Going forward, we will present the development of not just the children but also the inexperienced adults, so please anticipate it.”