“Hotel Del Luna” is about an elite hotelier Goo Chan Sung (played by Yeo Jin Goo), who ends up as Hotel Del Luna’s manager after a fateful incident, and the hotel’s beautiful yet aloof CEO Jang Man Wol (played by IU). Here are some key points to anticipate in the second half of the drama:

There was no direct love confession, but as the hearts of Jang Man Wol and Goo Chan Sung grew closer, a change came to the Wolnyeongsu tree, which had not budged or blossomed for more than a thousand years. But the stronger their feelings for each other got, the crueler the fate cast upon them became. It is due to the prophecy of the divine being Ma Go(Seo Yi Sook) who said, “The leaves will bloom, the flowers will fall, and your time will flow again,” which seems to imply that Jang Man Wol will have to leave when Wolnyeongsu’s flowers fall.

Demonstrating Jang Man Wol’s determination to leave Goo Chan Sung, she and Hotel Del Luna disappeared without a trace. As a result, viewers’ attention is focused on the end of their love story. While it is difficult to predict how their romance will unfold, viewers are rooting for the possibility of hope.

Will there be a “healing” moment for the three ghost hoteliers?

The mysterious Hotel Del Luna houses three ghost hoteliers who have vowed to protect the hotel—Kim Sun Bi (played by Shin Jung Geun), Head of Room Services Choi Seo Hee (played by Bae Hae Sun), and doorman Ji Hyun Joong (played by Block B’s P.O). They were able to stay at Hotel Del Luna thanks to Jang Man Wol, and they are afraid that they may have to leave when she does.

While their full stories haven’t been revealed yet, their hearts have been changed by Goo Chan Sung. Even Choi Seo Hee, who had drawn a firm line with him, shared, “Goo Chan Sung is a really good young man. It makes me feel sorry to hate him.” On top of that, Ji Hyun Joong is portraying an unexpected romance with Kim Yoo Na (played by gugudan’s Mina), an intelligent and ambitious high school student. How will their changes affect their obsession with the live world, and will they have their own moments that bring them inner peace? 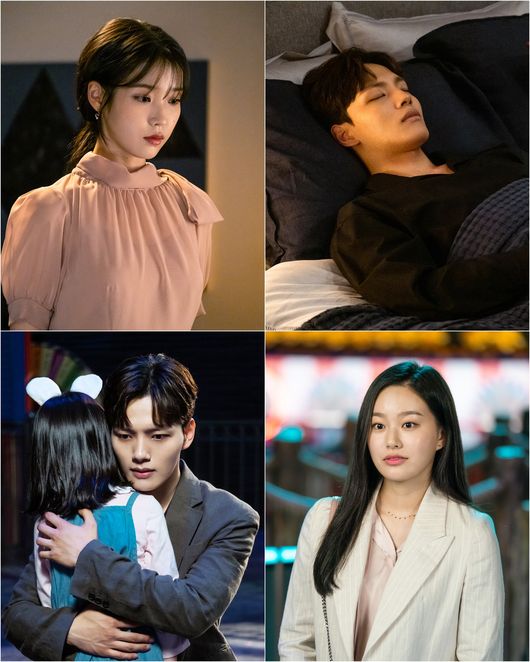 The production crew shared, “‘Hotel Del Luna’ has already finished telling the first half of its story and reached its halfway mark. Thanks to the enthusiastic love sent by our viewers, we’re working hard to make the rest of the story as well. We ask for your continuous love and interest.”

“Hotel Del Luna” airs on Saturday and Sunday at 9 p.m. KST. Catch up with the latest episode below!