SHINee’s Taemin and Key shared a touching conversation on Instagram that has moved fans!

On August 12, Taemin posted a photo on his Instagram of all five members of SHINee on stage. He wrote in the caption, “Members, I finished my tour today! I miss you.”

Key, who is currently carrying out his mandatory military service, replied to say, “Well done, great job. Oh right, it’s time for me to hand in my phone.” Taemin replied with symbols for laughter and said, “Goodnight.” 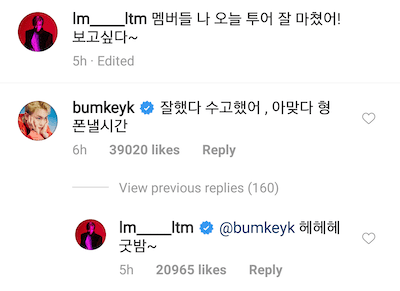 Taemin held a solo arena tour in Japan this summer that began in June and included seven cities and 17 concerts performed for 150,000 fans. His third Japanese mini album “Famous” was released digitally on August 4, and the physical version is due out on August 28. Key is currently serving as a member of the military band after enlisting on March 4.