Kim Go Eun shared her thoughts on her co-star Jung Hae In when the two actors appeared as guests on the August 13 broadcast of SBS PowerFM’s “Cultwo Show.”

DJ Kim Tae Kyun introduced Jung Hae In as Kim Go Eun’s first love in tvN’s “Goblin.” Speaking about their teamwork, Jung Hae In said, “I met her briefly on ‘Goblin.’ She has the ability to make people feel comfortable, so I think our teamwork became better.”

Kim Go Eun and Jung Hae In have reunited as leads in the upcoming romance film “Tune In For Love” where they’ll tell the story of two lovers who reconnect after years of bad timing.

“I’ll try to talk about him in a good way,” joked Kim Go Eun. “As you can see, he’s very kind and polite. But as a plot twist, he’s also very good at drinking. He doesn’t really show that he’s drunk. I’m very playful and he makes me want to play jokes on him. He has a serious personality, and it’s really funny. He’s the type of person who’s not good at taking compliments, so he doesn’t know what to do when you give him lots of compliments.”

The DJ said to the actor, “What does it feel like to have a head that small and be that handsome?” Jung Hae In made everyone laugh by not knowing how to react and apologizing. 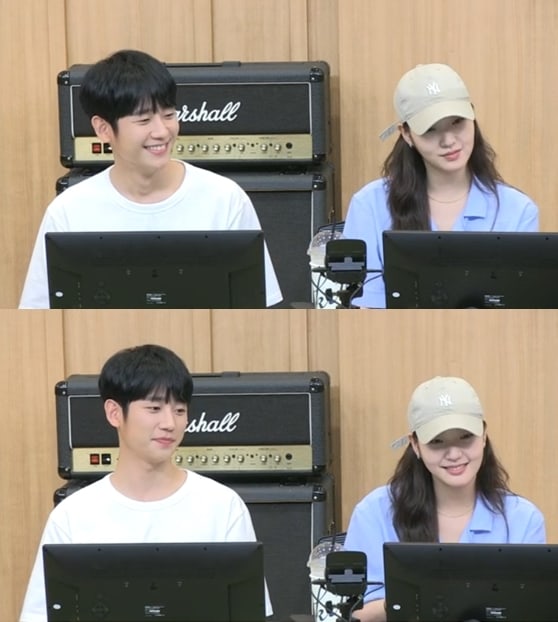 “Tune In for Love” premieres on August 28. Check out the latest trailer here.

Cultwo Show
Jung Hae In
Kim Go Eun
How does this article make you feel?