Jung Hae In Tells Story Of An Almost Fatal Incident, Talks About Career, And More

Jung Hae In shared stories from his life and thoughts on his career.

On August 13, the actor appeared on V Live’s “Actor & Chatter” to promote his upcoming film “Tune In for Love.”

MC Park Kyung Lim asked him about a miraculous moment, and Jung Hae In replied, “There was a time when I almost died.”

He explained, “On my way to Seoul from Daejeon on a really rainy day, my car suddenly broke down and stopped on the highway. The steering wheel was stuck. I started the car again and turned the wheel to park the car on the side of the road. It was for a split second, but as I went into the side lane, I could see large cars coming up behind me in my rearview mirror. I flashed my high beams, but I thought I was going to die right then and there.”

He added, “I returned to the military base and lied down, and I immediately thought about my grandfather who had passed away. I thought that my grandfather helped me out. My parents sobbed when I came out on break and told them. I experienced a moment when my life flashed before my eyes.”

When the MC asked about his grandfather, Jung Hae In’s eyes became tearful. “It was my grandfather’s wish, but he wasn’t able to see me on TV,” said the actor. “I’m working hard, so please watch over me.”

MC Park Kyung Lim comforted him, saying, “He’s going to watch over you more than anyone else. He’s always going to be with you.” 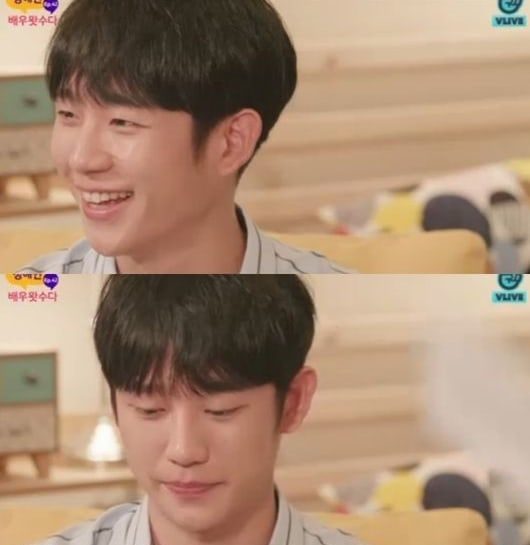 Jung Hae In also discussed some of his past works. Speaking about his character Ji Ho in “One Spring Night,” he said, “He was the most difficult character out of all of the ones I’ve played so far. He’s someone who is easily moved and has pain. He gets moved by even the smallest thing and cries easily. All of [the characters] have a part of me in them.”

As for his standard for choosing projects, he explained, “Instead of the size of the character or genre, it’s important whether or not I feel something strongly when reading it. The first feeling is important.” 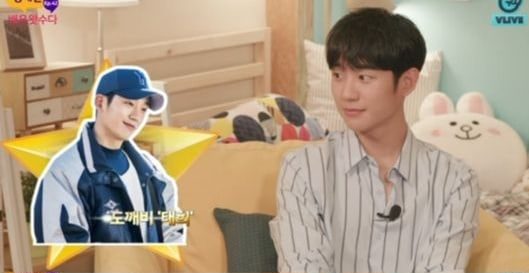 Ending the broadcast with a message to his fans, Jung Hae In said, “Because my job is acting, my existence has no value if there’s no one watching. The fans are the most important. It’s the reason why I act. I act because I like it and it makes me happy, but I also feel grateful that you all like it. It’s not that I think that I should act for the people watching, but I feel more responsibility. I don’t think I could continue this job if I couldn’t be responsible for my acting as much as people are watching.”

When asked what job he might have if he wasn’t an actor, Jung Hae In stated, “I’ve never imagined it. I think being an actor is my calling. I’m happy getting to have many jobs as an actor.”