During the first segment, Kim Jin Woo talked about his single album “JINU’s HEYDAY” and gave some spoilers while looking at photos on a board. About the magazine-style album poster, he said, “We chose a good concept. Isn’t it pretty?” He explained, “I wanted to show you who I am. I once said that I wanted to fill a magazine with just myself if I got the opportunity to do so. I remembered that idea and used it.”

Kim Jin Woo then described his album. “It’s about the best days and the best time [in one’s life],” said the idol. “I can say that I’m at my best right now and it also means that I can prepare for another heyday through this album. I liked this the best out of the many words the staff suggested.”

As for his title track “Call Anytime,” Kim Jin Woo explained, “It’s a pop genre track. Song Mino participated in writing the lyrics and the song, and also featured. A point to listen to in the track is the fun way of expressing detailed emotions that anyone can feel.” 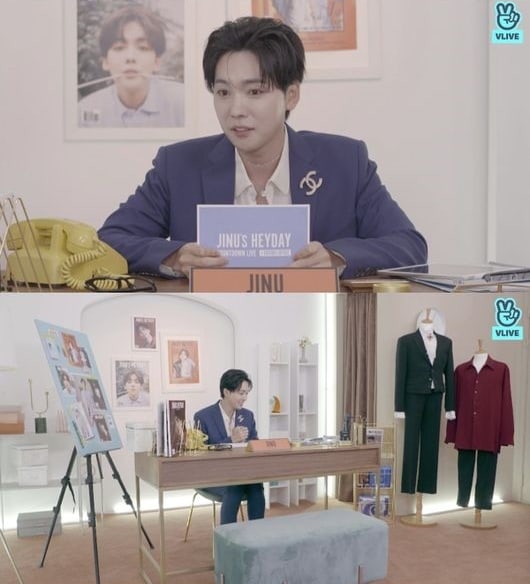 After revealing a behind-the-scenes video from the MV filming, Kim Jin Woo talked about making a solo debut. He said, “I filmed the MV while staying up all night, and I thought, ‘Mino must’ve also had a hard time like this.’ There was something about being alone. The waiting room is always noisy, but I felt the absence of the members a lot since it was quiet. I felt a bit lonely. But Seung Yoon came to cheer me on with [his dog] Thor. It gave me lots of strength and I was so grateful.”

The idol then called Song Mino. As soon as his fellow member answered the phone, Kim Jin Woo shouted, “I’m having a really hard time. I can’t do this alone.” Song Mino replied, “Do you realize how precious a team is? I feel as if I’ve left my child alone.”

When asked about what he thought when Kim Jin Woo asked him to feature on his song, Song Mino answered, “Is that a question? Of course, I didn’t want to do it. I’m joking. I can do it as much as you want. I can do everything for you. Saying ‘Thank you’ is even weird between us. It’s such an obvious thing. I could even help you put your clothes on.”

Song Mino concluded, “I feel worried as if I’ve left my child alone, but I’m looking forward to it because I know that you’re someone with potential. This song is good and above my expectations. I hope you’ll do your best during your promotions.”

Kim Jin Woo continued the broadcast by answering questions from fans. About the time of day that matches the best to “Call Anytime,” he said, “It’s good to listen to it at night and when the sun is shining during the day. I think it matches well with everything. I personally think that it’s a bit better at night.”

He concluded by stating his goals for these promotions. “I want to spend a lot of time with fans and appear a lot on TV,” said Kim Jin Woo. “I hope there will be many opportunities to see fans. That’s my goal.”

WINNER
Kim Jin Woo
How does this article make you feel?