With just four episodes left, OCN’s Saturday-Sunday drama “Watcher” is gearing up for a thrilling and unexpected finale.

“Watcher” tells the story of three people (played by Han Suk Kyu, Seo Kang Joon, and Kim Hyun Joo) who go hunting for the truth behind a brutal murder that occurred 15 years ago. The drama is directed by Ahn Gil Ho and written by Han Sang Woon.

The drama has shown good results for a cable drama, recording a personal best average viewership rating of 6.1 percent on August 11. This is the highest viewership rating for an OCN original drama in 2019, and ranks within the top 3 of all OCN dramas to date.

In an interview with Ahn Gil Ho, he said, “Unlike other genre projects, there is a psychological element to the characters. That’s why the acting adds a huge amount of suspense and tension to the story. It can be tough to make a story from each of the three lead characters’ point of views, but I did my best to direct in a way so that one person didn’t end up controlling the story. Like the title implies, ‘Watcher’ is about how a situation or case can change according to the point of view of the person who is watching.”

Ahn Gil Ho praised the lead cast, saying, “Han Suk Kyu’s passion is really admirable. He puts a lot of detailed analysis into his characters and gives them their own color. You can feel that he really loves his character, Do Chi Gwang. He is also very respectful to his fellow actors. It’s an honor to be able to film his acting on camera.”

He continued, “[Seo Kang Joon] is an actor who has acting talent, passion, and a good character. You can’t help but admire him if you work with him. [Kim Hyun Joo] is a perfect Han Tae Joo, elegant, intellectual, and sharp. She is a character that always brings the decisive plot twist to the story, but [the actress] is also skilled at bringing out subtle emotions.”

The director also took the time to praise the supporting cast. “Not only the leads, but also Heo Sung Tae, Park Joo Hee, Joo Jin Mo, Kim Soo Jin, and Jung Do Won have been going beyond expectations in fulfilling their roles. They make the project shine. All the actors have brought detailed and realistic acting to the story, so I’m grateful to them as a director.” 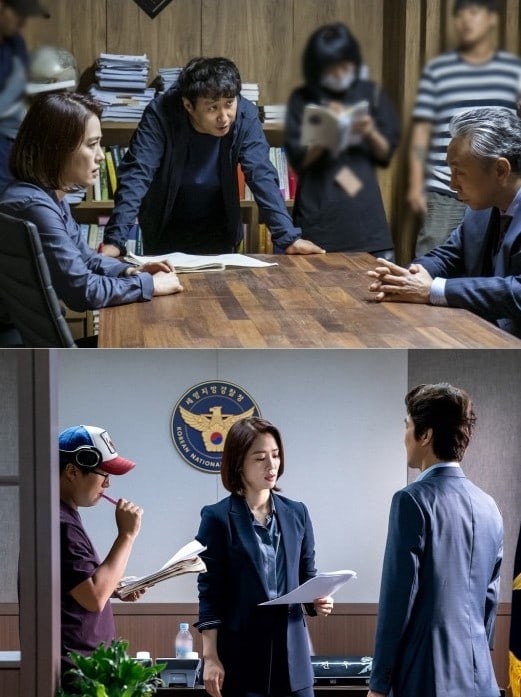 Check out the latest episode of “Watcher” with English subtitles below!