Ariana Grande settled for the next best thing to taking a group photo with BLACKPINK—being edited into one!

On August 16 KST, American music producer Tommy Brown took to Instagram to share a photo that he’d snapped with BLACKPINK in Korea. The famous producer, who has worked with Ariana Grande on many of her songs—including her recent hits “7 Rings” and “Thank U, Next”—playfully wrote in the caption that he was a “New member of [BLACKPINK]. I know I’m your favorite.”

Jisoo responded by jokingly commenting, “Welcome,” while Ariana Grande expressed her envy by writing in the comments, “This is the best photo I’ve ever seen,” followed by “Please and I mean please… please photoshop me in.”

New member of @blackpinkofficial I know I’m your favorite ? 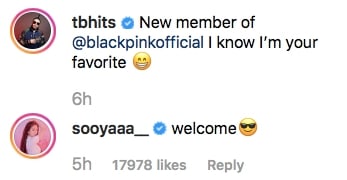 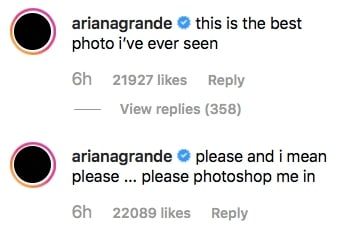 Shortly afterwards, Tommy Brown made Ariana Grande’s wish come true by posting a new version of the photo, this time with the American singer edited in. He jokingly added in the caption, “Sry here’s the real one.”

Ariana Grande playfully responded in the comments, “Ty so good seeing u guys.” Rosé reacted to the edited photo with an enthusiastic “Gahh,” while Jennie commented, “Lmy guys already.”

Sry here’s the real one 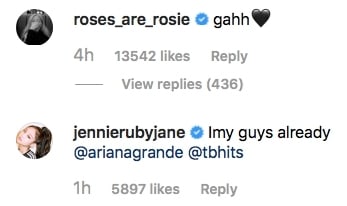 Earlier this week, Tommy Brown’s friend Tony Fernandes revealed on Instagram that the producer had worked with BLACKPINK during his time in Asia.

My man @tbhits in Malaysia after working with @blackpinkofficial. Getting to understand the ASEAN music scene. What a talent. But what I love about him is his humility. A good soul. Long may that continue and let’s make some great music together.

Would you be interested in seeing a collaboration between BLACKPINK and Ariana Grande? Share your thoughts below!

BLACKPINK
Tommy Brown
ariana grande
How does this article make you feel?