Jung Hae In sat down for an interview on the August 16 episode of “Entertainment Weekly”!

During a “guerrilla date” interview on the street surrounded by a big crowd, he was asked by a fan, “Don’t you want to date?” Jung Hae In replied, “I want to date.” He also shared that his ideal type is a good-hearted person.

When asked if he has a girlfriend now, he hesitated for a moment before pointing to a poster of his upcoming film “Tune in for Love,” which also features Kim Go Eun. The interviewer and fan laughed and said, “Ah, you have one in the story!”

During the interview, Jung Hae In played a lie detector game. He had to either agree or disagree with the statement “There’s something about my appearance that I don’t like,” and he agreed that this is true. Although the detector said that he was lying, Jung Hae In explained, “My eyes get puffy a lot. I don’t have double eyelids, so if I eat something bad or I’m not feeling well, when I wake up in the morning my eyes are puffy.”

Jung Hae In was also asked to test his answer to the statement “My heart has fluttered because of my female co-star’s acting.” Jung Hae In said, “Yes, that happens a lot,” and the detector confirmed it.

“My heart flutters even when they’re not acting, but when we act together, it flutters more,” he said. “Even if we rehearse a lot together, there are times when I feel the harmony between us. I feel like it’s a big help to me at that time, and I’m grateful.”

Jung Hae In was also asked if he still has abs. He laughed and said no, explaining that they’re hard to maintain. “If there’s a role where my physique is important, then I’ll prepare for that again,” he said. 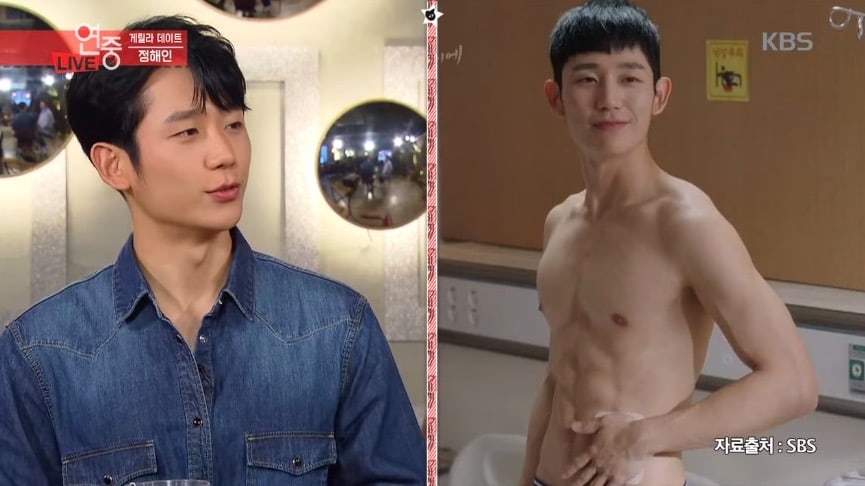 When asked what actor he’d like to work with, Jung Hae In answered Han Suk Kyu. He sent a video message to Han Suk Kyu and said, “I’m always supporting you as a fan from a distance.”

Jung Hae In and Kim Go Eun’s new romance film “Tune in for Love” hits theaters in Korea on August 28.

Jung Hae In
Entertainment Weekly
How does this article make you feel?