In the V Live broadcast, the members shared a meal together and celebrated their anniversary with a cake. The members also took the time to reflect on the past five years together and their hopes for the future. 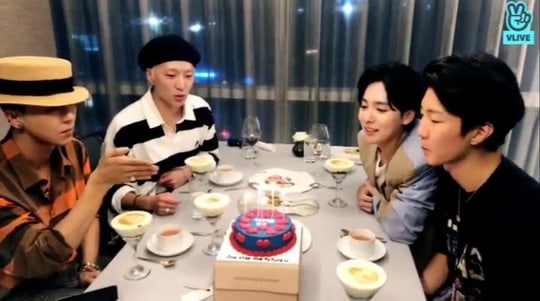 Song Mino said, “This is our 5th anniversary. I’m so grateful to the members and Inner Circles [fanclub name] for being with me for over five years. It feels good to be able to celebrate good times with everyone on a good day like this. I hope that WINNER continues to be healthy in the future.”

Lee Seung Hoon said, “If you compare right now to five years ago, there are a lot of things that have changed. Our looks, our personalities, our style. But whether it’s the 5th anniversary or the 50th anniversary, our grateful and loving feelings toward Inner Circle won’t change, except to grow stronger. Everything else can change. Because the world around us is changing, we can’t help but change. But when we need to be together, we’re together, and while our feelings for fans may grow stronger, they won’t change. I’m sincerely grateful for the love we’ve received for the past five years. I will believe in my feelings for everyone and keep walking forward as WINNER’s Lee Seung Hoon. Thank you.”

Kim Jin Woo said, “I think that it’s like this. It’s hard to like one thing for five years. I really do think that. Whether it’s an object or a person, it’s an amazing thing to keep liking, supporting, and caring for something for this long. That’s why I’m grateful [to the fans]. I would be grateful if they kept doing that amazing thing for us. We WINNER members always respect Inner Circles. I hope that my feelings and Inner Circles’ feelings won’t change. Thank you.”

Kang Seung Yoon said, “For the past five years, we’ve changed and grown positively according to the times as people do. I don’t think that it’s a good thing to stay exactly the same. I think that you should show that you’ve matured into a better person. Anyway, I will say to everyone that our mindsets haven’t changed. I think that we can work harder if we keep that promise in mind. For the past five years, we’ve tried to keep our promises to fans. I’m sure there were promises we couldn’t keep, but in the future, I will always take our promises seriously. If we keep doing that, I think we could reach our 44th anniversary someday.”

He continued, “We’ve worked hard until now to achieve what we’ve talked about among ourselves. You [the fans] have also been with us in order to achieve something. But now, rather than achieving something, I think that it’s more meaningful just to spend time together. When you first debut, you want to succeed as a singer and get first place and you have all these goals and big dreams. Now I mostly just want to keep doing things together. I’m grateful to everyone for helping me realize that. I’m grateful that you’ve stayed by our side for five years. We will work hard to become a WINNER you can be proud of.”

Congratulations to WINNER on their 5th debut anniversary!