As tvN’s “Hotel Del Luna” continues to rise in viewership ratings and dominate rankings for buzzworthy dramas, one factor that keeps viewers hooked are the endings of each episode. Whether it is heart-fluttering, fond, or curious, these ending scenes evoke a whole range of emotions that make viewers anticipate the next episode even more. 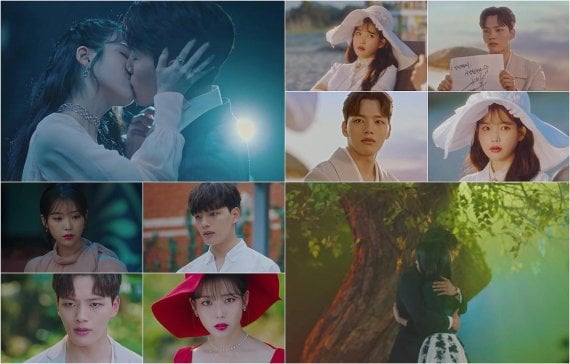 Here are five endings that make viewers want to replay them over and over!

When the ancient tree began to bear leaves because of Goo Chan Sung (played by Yeo Jin Goo), the Hotel Del Luna staff attempted to chase him off by sending him to Room 13, which houses a ghost that hates even the sound of a human’s breathing. Without knowing a thing, Goo Chan Sung entered the desolate room that contained just a wardrobe, and the ghost slowly appeared.

At the moment Goo Chan Sung was about to fall into danger, Jang Man Wol (played by IU) approached him and said, “Goo Chan Sung! Don’t look, don’t even breathe.” In order to stop him, Jang Man Wol kissed him. This ending for the fourth episode has firmly kept its first place rank for highest viewer count since it aired.

Jang Man Wol found her excitement at the thought of going to the beach with Goo Chan Sung to be bittersweet, and she was tormented after rediscovering the part of her heart that looks forward to being with someone. To Jang Man Wol, who was having these thoughts, Goo Chan Sung presented an autograph from Kim Jun Hyun and said, “Even though I had to run and embarrass myself, I got this for you because I thought you would like it.”

Everything changed for Jang Man Wol in that moment as her heart fluttered. She remarked, “I’ve become a bit sad, because the ocean I am looking at now is more beautiful than the one I was looking at before.” The ending to episode six remains a legendary scene for the ManChan couple, as it marks the moment they begin to have feelings for each other.

After seeing Mi Ra (played by Park Yoo Na), who had taken the face of Song Hwa, Jang Man Wol hatched a plan to destroy her. However, Jang Man Wol could disappear at any moment if she harms a human. Thus, Goo Chan Sung sacrificed himself to save Jang Man Wol, but he was unable to wake up for several days because of his injuries.

Jang Man Wol did not wish to share her own personal hell, so she said, “Goodbye, Goo Chan Sung,” and departed after leaving that one-sided farewell. Viewers were left curious to how the second half of the drama would unfold as Goo Chan Sung was seen gazing at the empty Hotel Del Luna with a blank expression.

Goo Chan Sung was afraid that Jang Man Wol would become a handful of ash and disappear like the ghost in Room 13. Although he didn’t tell anyone, Jang Man Wol knew of his feelings and left behind a medicine that would make him unable to see ghosts. However, Goo Chan Sung threw that medicine away before Jang Man Wol’s eyes.

His answer was to go together on the scary path ahead. He confessed, “I will continue to be in danger, so continue to protect me.” This ending scene made hearts burst at just the beginning of the second half of the drama.

During the ending of episode 10, Jang Man Wol showed weakness for the first time. She confessed to Goo Chan Sung, “Even if I disappear some day, please stay with me,” and he replied, “No. I won’t let you disappear. Trust me.” Jang Man Wol shed tears from her complicated feelings of gratitude, sadness, and comfort, and she was warmly embraced by Goo Chan Sung.

At that moment, as if they were waiting for it, flowers bloomed on the ancient tree. Although there is no telling when the flowers will wilt, this ending was a joyous moment for viewers cheering on this romance.