Ku Hye Sun has shared a set of text messages exchanged between her and Ahn Jae Hyun about their impending divorce.

On August 18, Ku Hye Sun took to Instagram to reveal that her husband Ahn Jae Hyun wanted a divorce. Later that morning, the actress returned to Instagram to post what appear to be screenshots of a text message conversation between the two spouses.

Ku Hye Sun: Not next week. Depending on how my mom’s doing.

Ku Hye Sun: To me, “New Journey to the West” isn’t more important than how my mom’s doing.

A: We’ve already come to an agreement, and all that’s left is the paperwork. I think it would be a meaningless meeting. Let’s move forward as scheduled, and I’ll meet with your mother.

A: I’ve also called her by phone.

Ku Hye Sun: I heard that you had made plans to meet. Contact me when you meet.

Ku Hye Sun: Just like you persuaded her when we got married, take responsibility and persuade her about our divorce. Paperwork isn’t hard.

The first text message pictured in the second image is cut off, so that only the final lines of the message are visible.

A: …and I don’t think it will be easy to sort out. I think it will be overwhelming for your mother, and I’m also overwhelmed. Let’s proceed with things according to plan, and I’ll meet with her [another time].

Ku Hye Sun: Work is more important than my mom?

Ku Hye Sun: What kind of loathsome talk is this.

A: I will speak to your mother by phone.

A: I don’t know what to say to her in person.

Ku Hye Sun: But you should still take responsibility. If you act callously like this, I’m not going to stand by and watch.

Ku Hye Sun: Meet her in person and apologize… for the fact that you weren’t able to keep your promises from when we got married.

Ku Hye Sun: Why is work important. If you say work is more important than my mom, then I really won’t hold back.

The actress added in the caption, “My mother has received a shock and is not in good health, which is why I have posted these words. I’m sorry.” 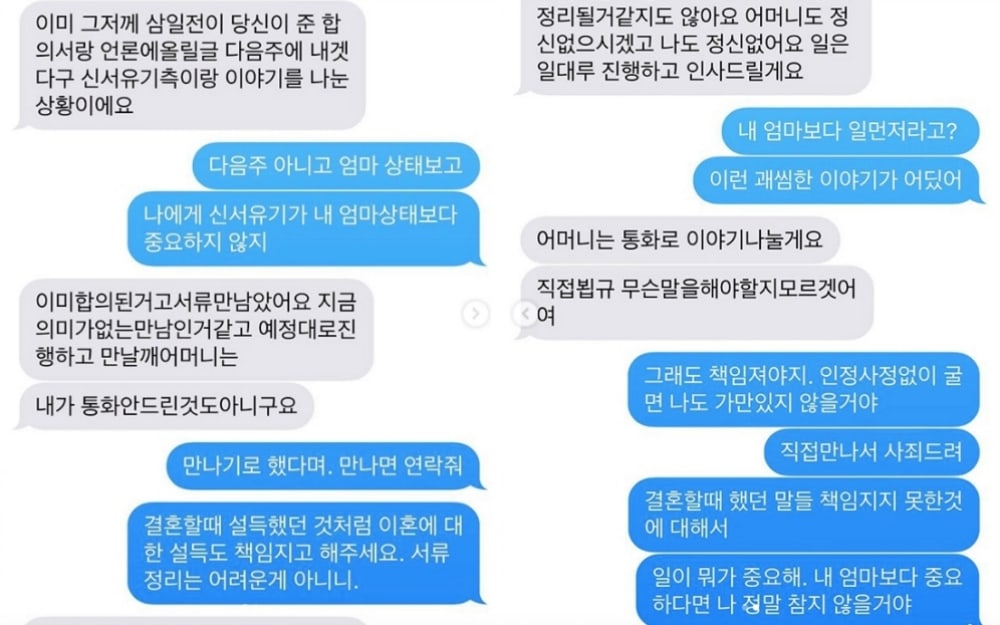