Watch: Yeo Jin Goo Makes Everyone Laugh With A Surprise Visit To “Hotel Del Luna” Set On A Day Off

In the clip, Yeo Jin Goo and IU are seen rehearsing the scene where she throws a pen out of anger. IU makes Yeo Jin Goo laugh with her nonchalant comical acting, and IU rotates her arm to get a better aim. Yeo Jin Goo warns the crew members to get out of the way since the pen will be flying in their direction. IU finally throws the pen but makes a blooper when she bursts into laughter at the loud sound the pen makes as it slams against something. The director jokingly scolds her for laughing, and IU explains, “I couldn’t help it when I saw you dodge it.”

The video also shows Block B’s P.O and gugudan’s Mina having trouble with the laughing virus while filming the scene where he yanks her into his embrace. The two get into position, and Mina looks at P.O while immersed in her character. When the director tells her to wait since he hadn’t given the cue sign yet, she bursts into laughter while apologizing.

From that moment on, Mina can’t stop laughing, and P.O takes the blame, saying, “It’s because I laughed. I’m sorry.” They manage to perfectly film the scene without any mistakes, and P.O cheerfully tells Mina, “It’s a success! Good job!” 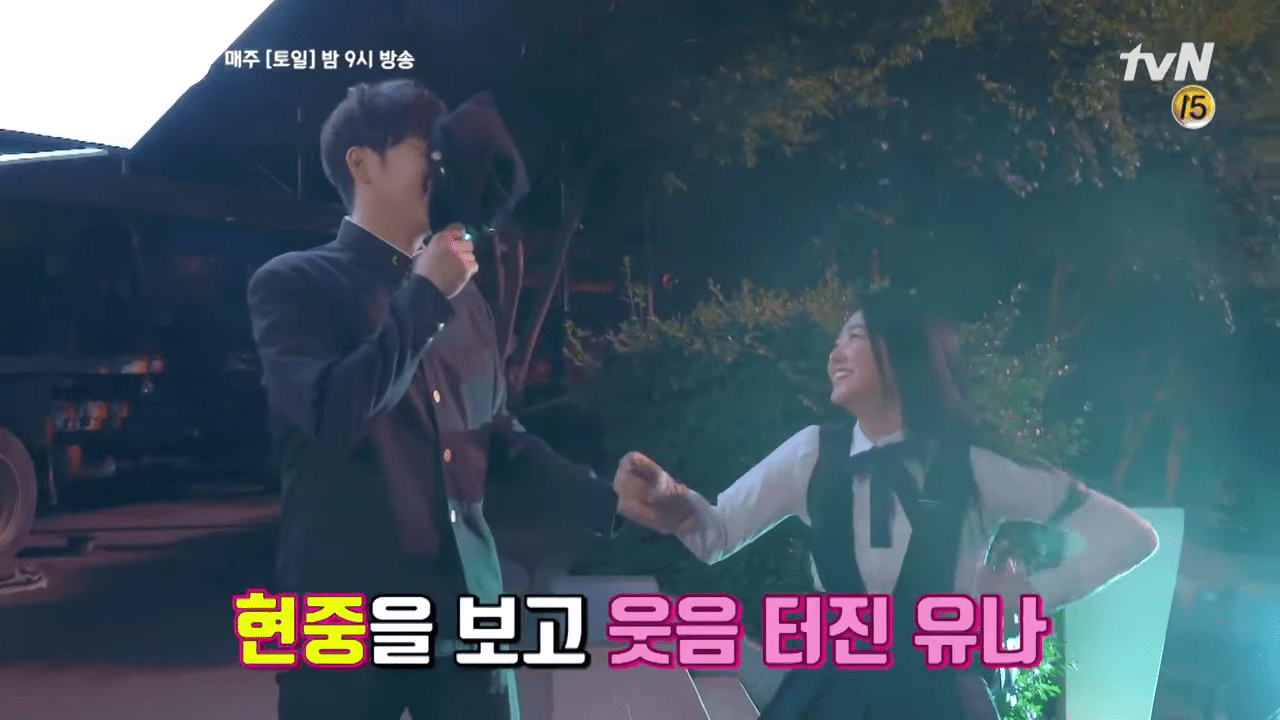 Yeo Jin Goo shows up on set when he doesn’t have to film and surprises the cast and crew. The silly actor pretends to be one of the crew members as he asks into the microphone, “Are you ready? Why is there no answer? I asked, are you ready? Is the set ready?” A crew member, who has no clue it’s actually Yeo Jin Goo on the other end, replies, “Please hold,” making everyone burst out laughing.

IU and Lee Do Hyun are pleasantly surprised to see Yeo Jin Goo. Lee Do Hyun cheerfully says hello while IU asks, “What brings you here?” Yeo Jin Goo asks if she didn’t know it was him on the microphone, and IU says, “Yes, I didn’t know.” The three of them sit down for a break, and Yeo Jin Goo warns IU not to work too hard. IU replies, “I love acting,” making Yeo Jin Goo cover his face at her unexpected answer.

Then Yeo Jin Goo reveals, “A light bulb exploded on set, and [IU] asked, ‘Did I bleed’?,” and IU smacks him, asking, “When did I say that?” Yeo Jin Goo and Lee Do Hyun team up to tease IU and give each other a high five in support of each other.

“Hotel Del Luna” airs every Saturday and Sunday at 9 p.m. KST. Catch up to the latest episode here: