Lee Seung Gi will be playing the role of Cha Dal Gun, a stuntman who admires Jackie Chan and dreams of dominating the action film industry. His goals change, however, when he loses his only nephew and tries to find the truth behind a mysterious plane crash incident. Not only does Cha Dal Gun have a black belt in martial arts and incredible skills in taekwondo, judo, jujitsu, kendo, and boxing, but he’s also absurdly confident and shameless.

In the stills, Lee Seung Gi wears a sleeveless top and shows off his toned arms. He casually drapes his towel over his shoulder and rests his hands in his pockets. As he poses, a large tattoo with the phrase “God of War” written in Chinese characters is marked on his bicep, drawing viewers’ attention. His serious expression and various facial injuries also pique viewers’ curiosity as to what exactly happened to him. 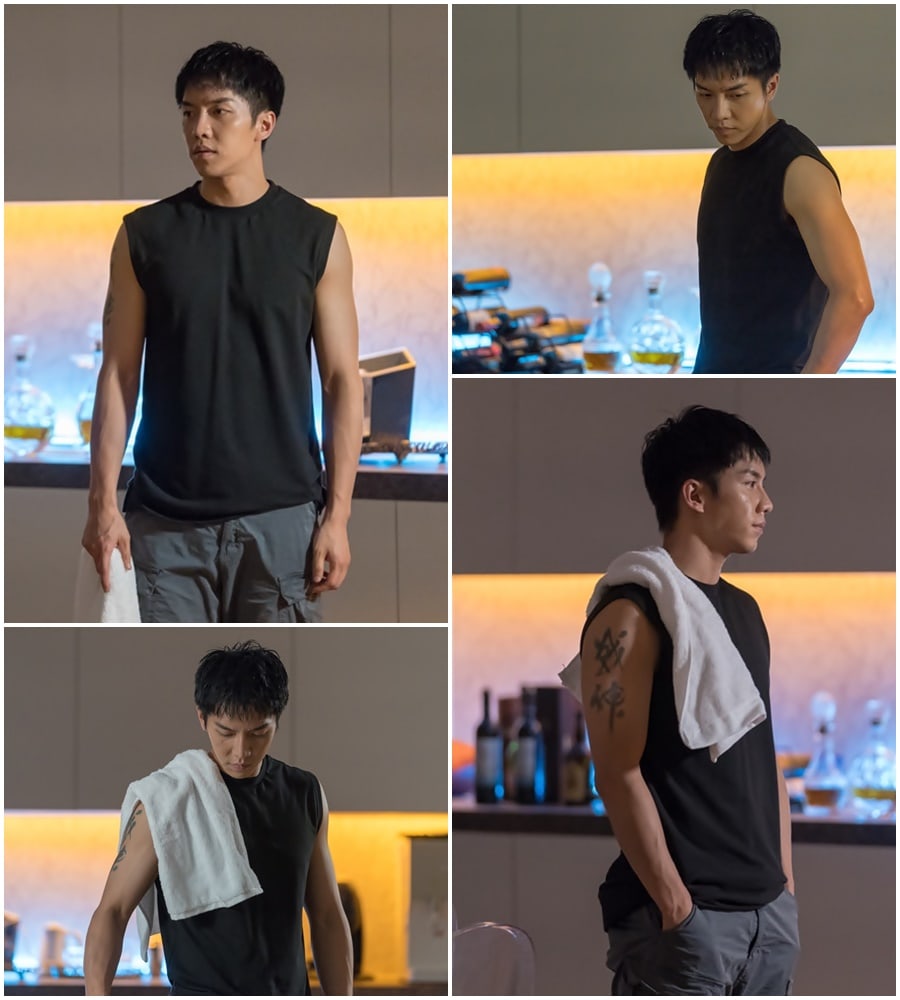 This scene in particular was filmed at an apartment studio in Seoul. Although it was overwhelmingly hot that day, Lee Seung Gi arrived on set with his signature positive energy. Though he was all smiles and helped bring up the mood, as soon as the cameras began rolling, he quickly immersed in his role and exuded a completely different energy until the director yelled cut.

Lee Seung Gi commented, “[Vagabond] is a work that I’ve been interested in since I first read the script. I felt a lot of pressure and responsibility because [Cha Dal Gun] was different from the characters I’ve played so far, but I also felt a sense of challenge. I feel the weight of the name ‘Vagabond,’ and I want to repay the fans who have been waiting for me for a long time with great acting.”

A source from Celltrion Entertainment said, “Lee Seung Gi is an actor who puts a lot of effort into his work through his unique passion and responsibility. With his role of Cha Dal Gun, who has a completely different look and atmosphere, you can look forward to Lee Seung Gi’s 180-degree transformation into a manly man, compared to his image of being the nation’s little brother and umchina [Korean word meaning mom’s friend’s son].”

“Vagabond” is set to premiere on September 20 as the follow-up to “Doctor John.” Check out a special making video here!