“Flower Crew: Joseon Marriage Agency” will tell the story of a king who makes a request to Joseon’s best dating agency Flower Crew to protect his first love. Upon his request, the matchmakers at the agency risk their own lives to transform the lowly woman Gae Ddong (Gong Seung Yeon) into the most noble woman.

In Kim Min Jae’s poster, he poses against a blue backdrop as Ma Hoon, Joseon’s best male matchmaker. The poster also features a quote that says, “At the Flower Crew, we find you a person, not love.” Gong Seung Yeon sits comfortably on the ground wearing a confident expression for her light-blue colored poster, which has the quote, “I really love dirty and difficult things, okay? It’s great. High-risk, high pay.” As Gae Ddong, she will take on any difficult task around the marketplace as long as she gets paid. 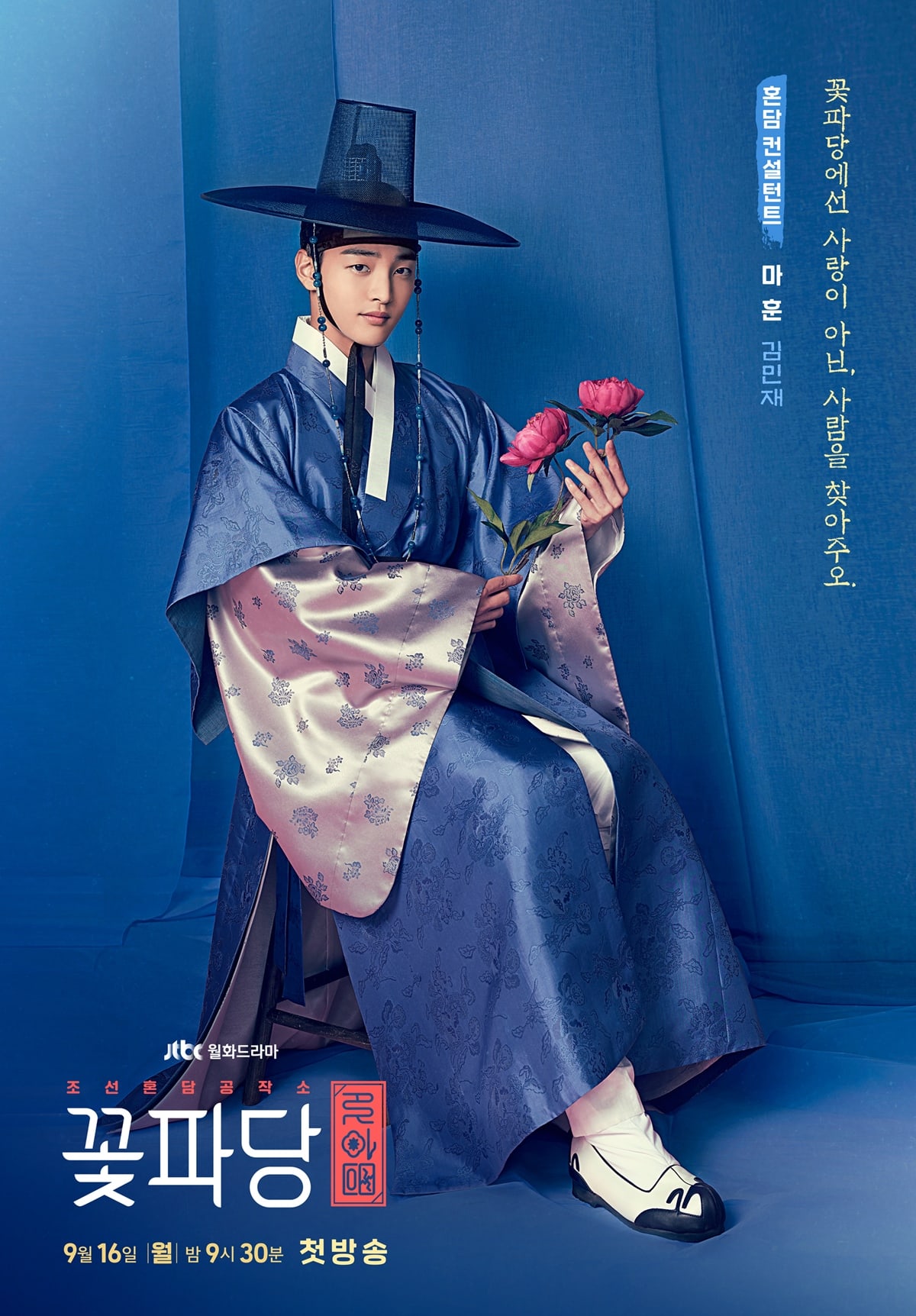 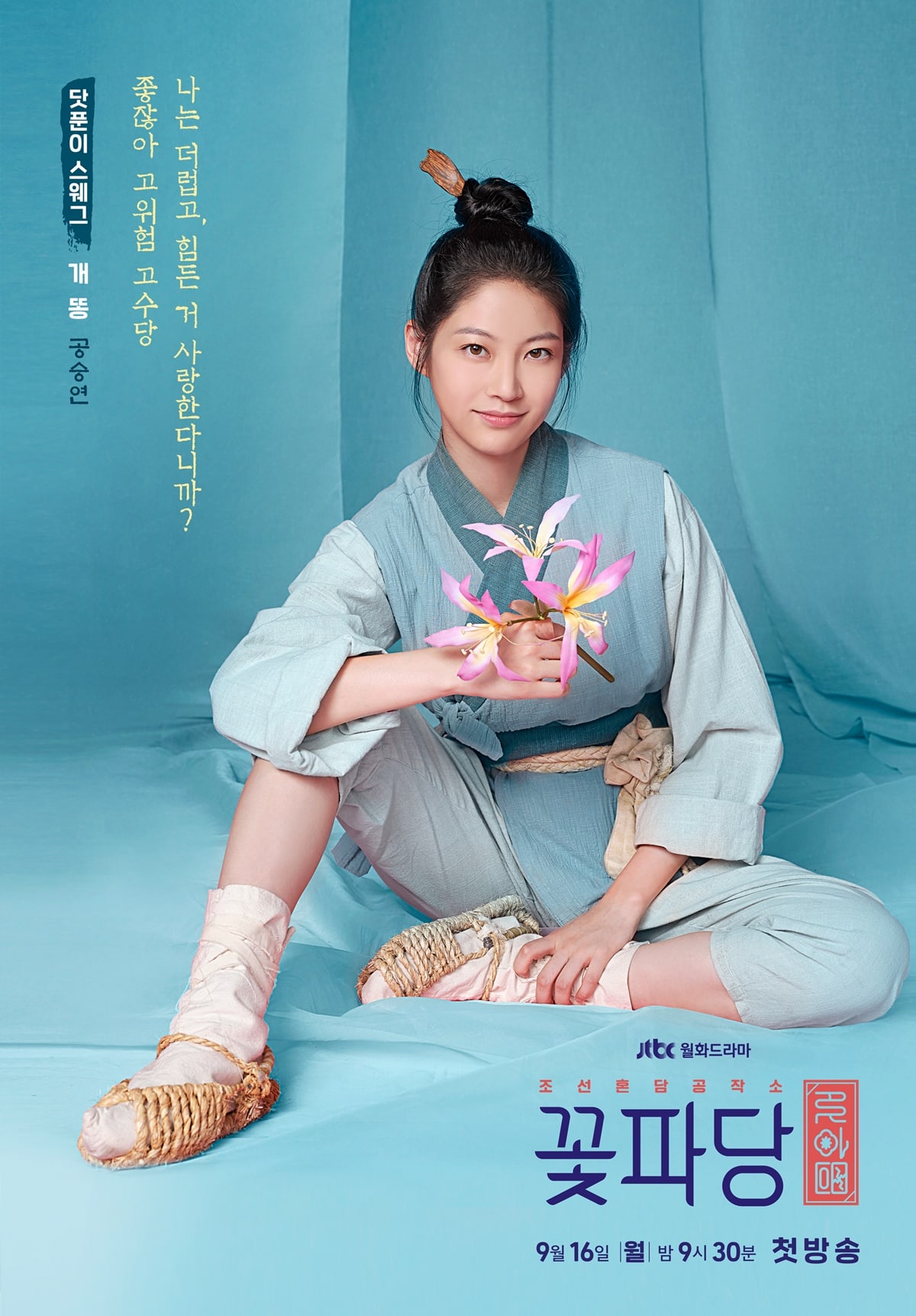 Seo Ji Hoon gazes lovingly at a flower as the king Yi Soo. He looks remarkably different in his red emperor’s robes and winged cap. His poster reads, “I’m already spoken for. I’ll uphold my principals and integrity,” hinting at his long-lasting love for Gae Ddong even after he becomes the king. Park Ji Hoon holds his flower close to his face as he gives a wink. He plays Go Young Soo, an image consultant and Hanyang’s very own celebrity, and his poster features a quote that reads, “I’m Go Young Soo. Can’t you tell by looking at my face? What am I going to do about this appearance I can’t hide.” 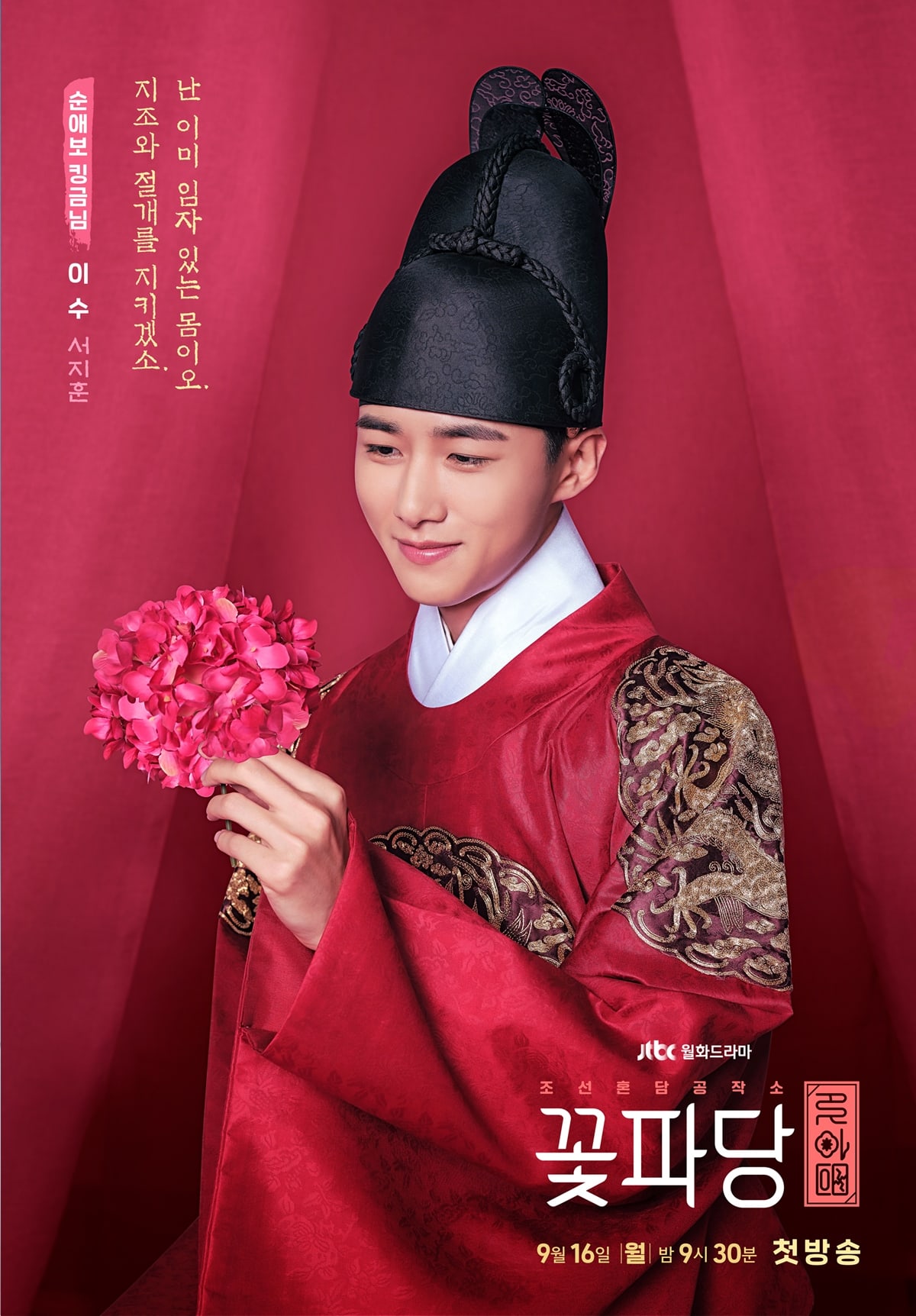 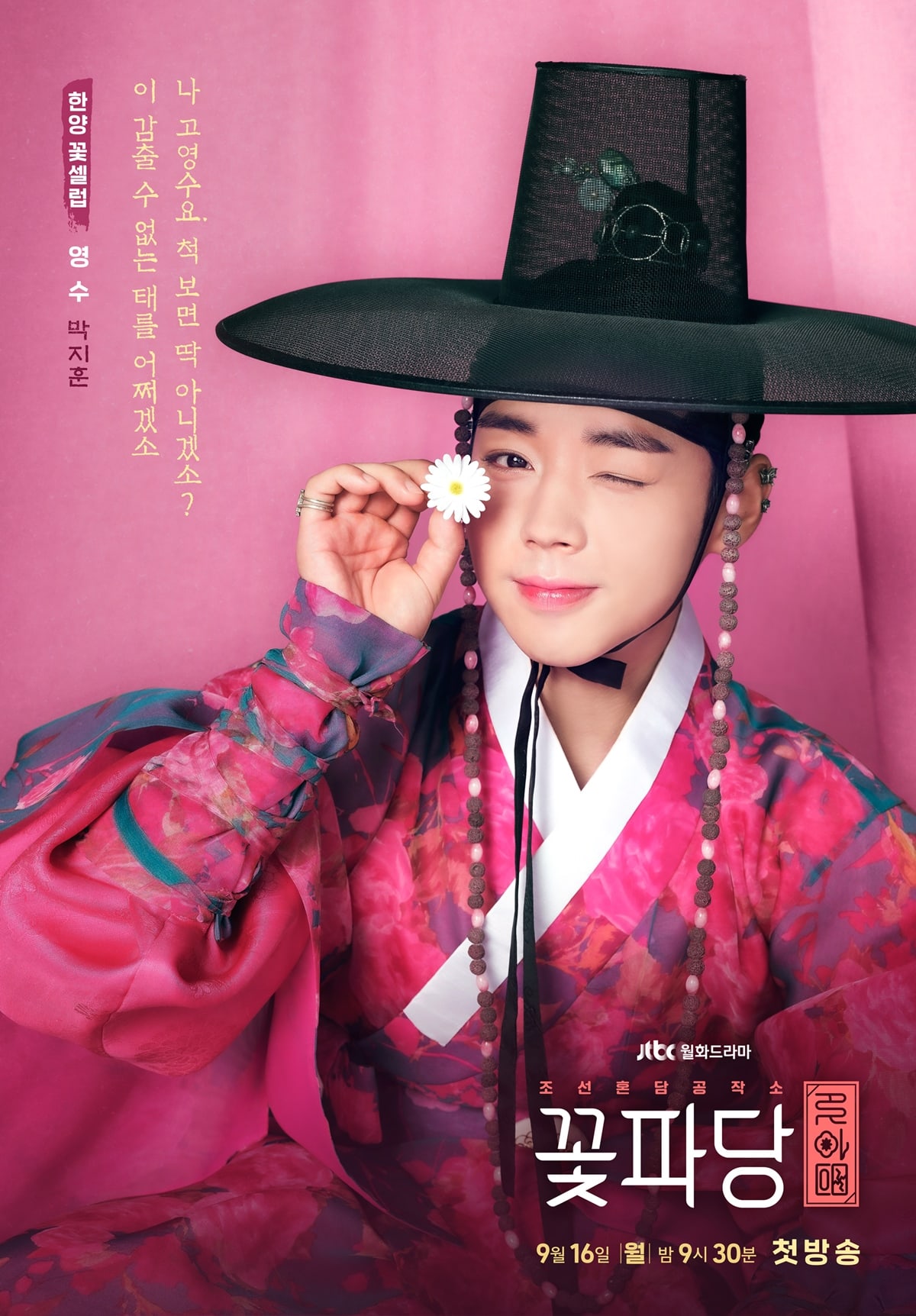 Unlike the other matchmakers, Byun Woo Seok wears his gat (traditional Korean hat) backwards and sits with a disheveled posture and charming expression. Although Do Joon is known as the Flower Crew’s informant, the phrase, “No matter how much I run, my life will remain in the same place. Isn’t everything someone else’s possession anyway?” raises questions about his hidden backstory. Finally, Go Won Hee is adorned in a yellow hanbok as she stares straight ahead, not a hair out of place. These features and her perfect posture reveal that Ji Hwa is a lady of the gentry class. Her quote, which reads, “I’ll be the highest-ranked woman in Joseon,” shows that although she was born a woman, she still wishes to reach her goals on her own. 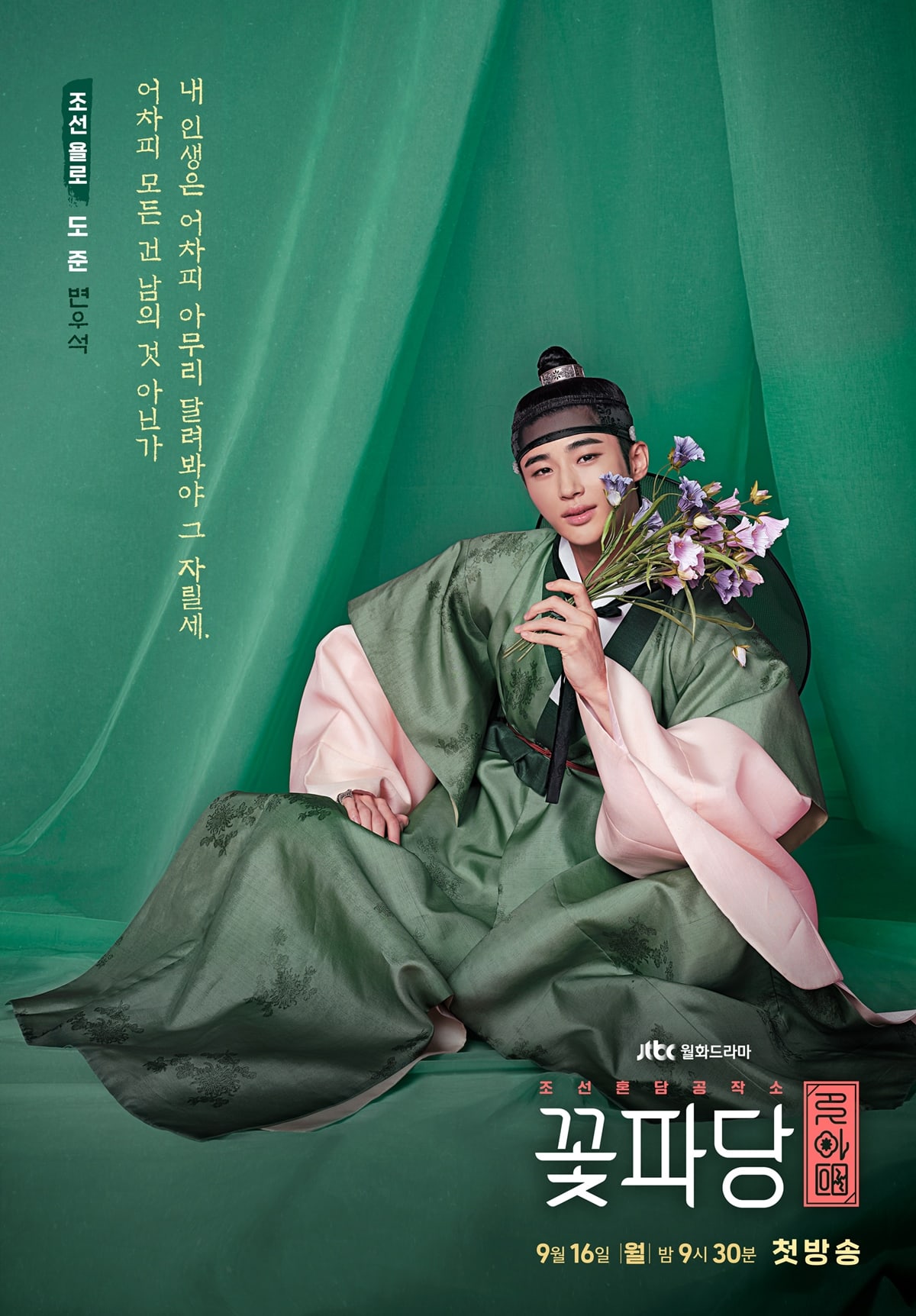 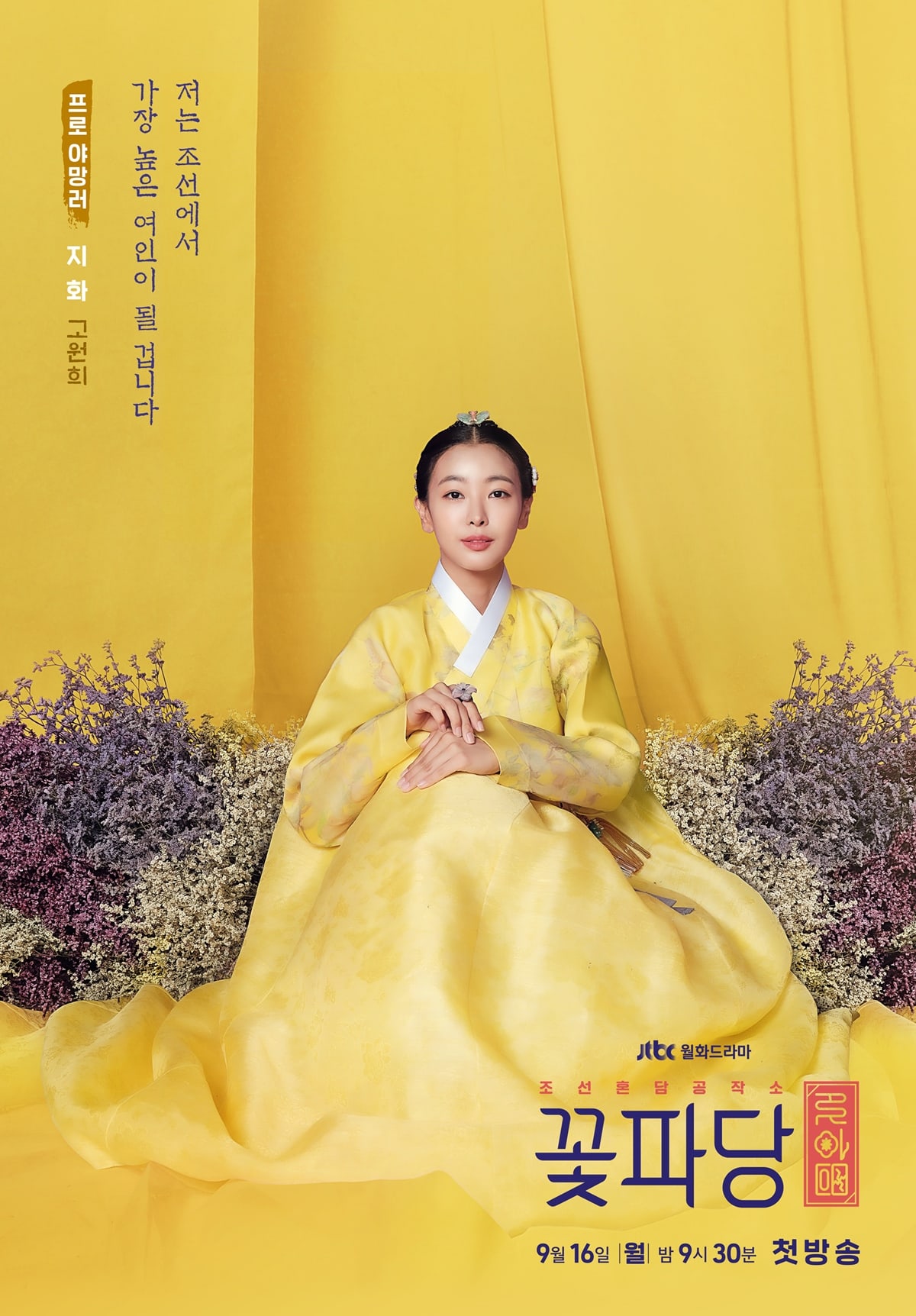 A source from the show stated, “If you look at the various colors and flower props that match the characters, you will be able to infer more stories. Please tune in to see what Ma Hoon’s peony, Gae Ddong’s magic lily, Yi Soo’s hydrangea, Go Young Soo’s Marguerite daisies, Do Joon’s morning glory, and Ji Hwa’s baby’s breath flowers, as well as the colors symbolizing each character, mean.”