NCT Dream has shared another gift with fans!

After celebrating their third anniversary on August 25 at midnight, the group has unveiled another music video for “Fireflies,” their track as the World Scout Foundation’s first global ambassador.

NCT Dream has shared a fun new video in honor of their third anniversary!

On August 25 at midnight KST, NCT Dream released a special dance practice video for their latest title track “Boom” to celebrate the third anniversary of their debut in 2016. The new clip features the six members sporting school uniforms as they perform the powerful choreography to “Boom.”

Shortly afterwards, NCT Dream began trending worldwide on Twitter as NCTzens shared their love and affection for the group on their special day. As of 12:57 a.m. KST on August 25, #3YearsWithNCTDream was No. 4 on Twitter’s list of top worldwide trends, with a Korean hashtag translating to “NCT Dream, congratulations on the 3rd anniversary of your debut” trailing close behind in the top 10. 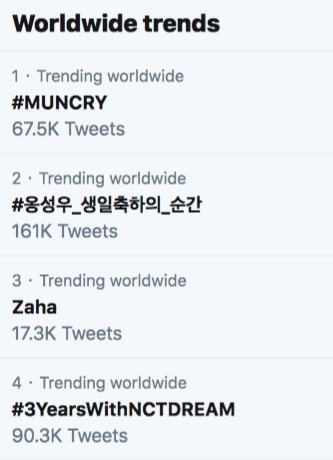 Congratulations to NCT Dream on their third anniversary!

Check out the group’s razor-sharp moves in their new school uniform version of “Boom” below: