Jung Hae In shared his thoughts on his acting career!

In a recent interview, Jung Hae In talked about his upcoming romance film “Tune In for Love.” The film is about Mi Soo (Kim Go Eun) and Hyun Woo (Jung Hae In), who coincidentally reconnect after knowing each other for many years. While their timing was never right, the film draws the story of how the pair eventually find their way to each other.

Jung Hae In mentioned his previous co-stars, saying, “Son Ye Jin and Han Ji Min sent encouragement, saying that they were looking forward to the upcoming film. I want to live up to people’s expectations.” He also shared that he tries not to become satisfied by titles such as “Melo expert” because the moment he lets his guard down, he’ll fall down.

The actor commented, “When acting, I think the most basic and important thing is to be considerate of others. Whether male, female, senior, or junior, if you act respectfully and thoughtfully, good chemistry will naturally occur. [‘Melo expert’] is a title I’ve been given because I’ve met such good partners along the way.”

Jung Hae In also talked about his role Hyun Woo. He said, “When I’m actually dating, I try to show everything without hiding anything, but I also think there’s no need to share all the pain you have.” He explained that respect and trust is important because everyone has their own dating styles, and continued, “He’s not the same as me, but there wasn’t a moment when I couldn’t relate to Hyun Woo.” The actor also mentioned that the time he spent rehearsing and discussing his character with the director was close to the time he spent filming.

On acting with Kim Go Eun, Jung Hae In shared, “Kim Go Eun said, ‘Our chemistry is good,’ and I think that’s accurate. While filming, I felt that we could relate just by looking at each other. I filmed happily and enjoyably. Since [Kim Go Eun] has already worked with director Jung Ji Woo, it helped me to adjust more quickly.” 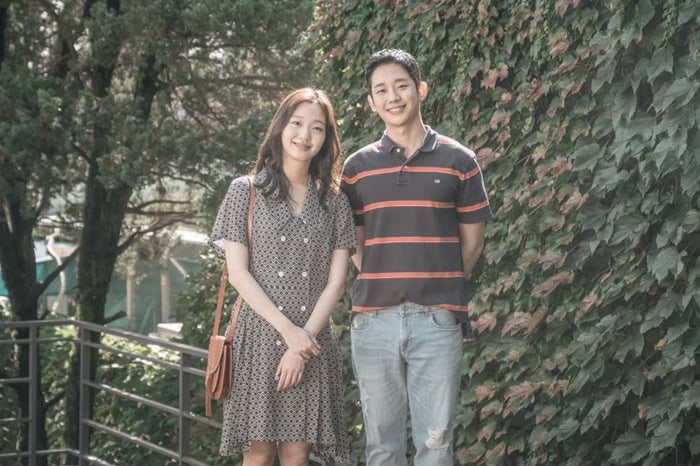 When asked if he was dating anyone, Jung Hae In wittily replied, “I’ve been dating Kim Go Eun. I tend to focus as much as I can on my co-star, and I’m focusing on Kim Go Eun now. Whenever [filming ends], I feel empty, and my heart aches; it feels like a breakup every time. I try hard to separate actor Jung Hae In and human Jung Hae In, but honestly, it’s hard. That’s why the emptiness that comes after projects is really big.” He shared that he wants to keep his acting persona separate so that he can continue acting for a long time.

Jung Hae In also talked about the difficulties of overcoming a slump while acting, admitting that he had recently gone through a difficult time.

He shared, “Perhaps because I put in too much energy into every project or perhaps because I still have so much to learn, there are some emotional aftereffects. Honestly, I had a hard time during ‘One Spring Night,’ and I think the [emotional and physical stress] that had built up exploded. I had no appetite and no desire to do anything. The short vacation [to Jeju Island] helped me get better, but I think I’m still in that state. I really want to go on a family vacation.”

During times of difficulty, Jung Hae In received support from his fans and family. He shared, “There are difficult times when I break and fall, but thanks to [my fans and family], I can stand again.”

“Tune In for Love” premieres on August 28. Check out a trailer here!