Eugene expressed her concerns about raising her eldest child Rohee on MBC’s “What Is Studying?” (literal translation).

The August 29 broadcast of the child care program provided a closer look at the family life of singer and actress Eugene. She shared her reason for appearing on the show as an MC, saying, “Honestly, I didn’t think I would worry about and become interested in child education so soon. Since Rohee is now 5 years old, the people around me have said, ‘Now is the beginning.’ I want to gain a course of action for what I need to do.” 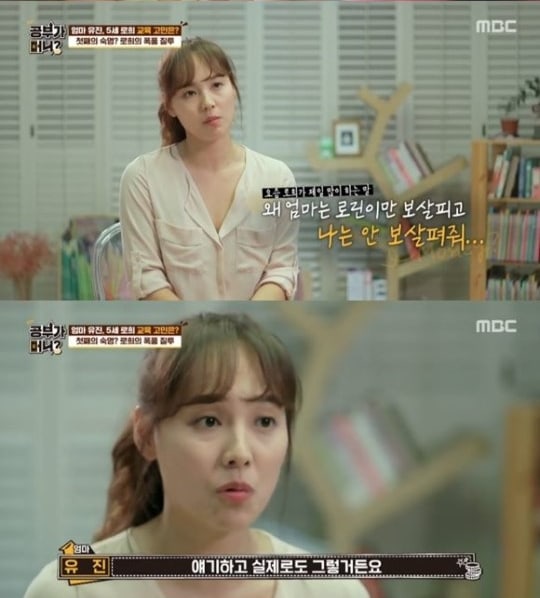 Rohee’s behavior was shown to change when her younger sister Rorin was around. When it was just herself and her mother, she would be happy while they played, but as soon as her sleeping sister woke up, her expression darkened. She ignored her mother’s words as Eugene took care of Rorin.

About this situation, Eugene explained, “The words Rohee says the most are, ‘Why do you only look after Rorin and not me?’ I always tell her, ‘I look after you a lot, too,’ and it’s true. It’s just that Rorin is still young, and Rohee feels deprived. I try my hardest to not make her upset, but it seems she still feels that way.” 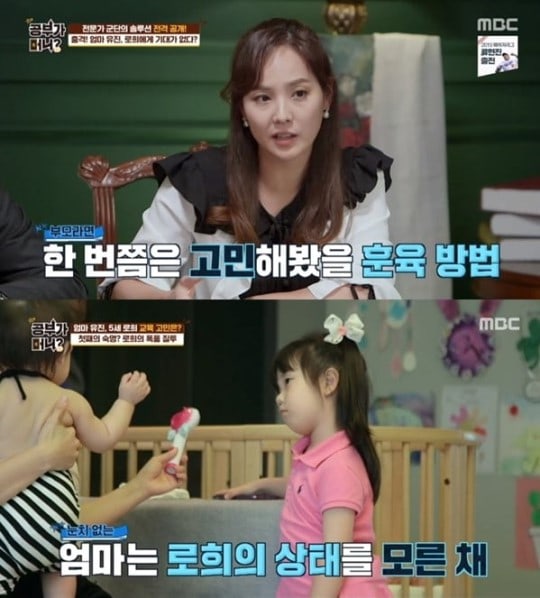 Eugene also consulted a child psychologist about Rohee in the episode. Psychologist Son Jung Sun reported, “Rohee’s IQ is 127. This puts her in the top 3 percent in her age group. All of her abilities are above average, particularly her language comprehension.”

“However,” Son Jung Sun continued, “her working memory is low. She’s unable to fully concentrate on her surroundings because she’s afraid of being wrong. She has the tendency to avoid things if she thinks she can’t do them well.”

Eugene was puzzled by this result, saying, “I’ve never told Rohee that she can’t fail,” and Son Jung Sun comforted her by explaining, “It’s a natural tendency. Mothers don’t need to feel guilty.”

Eugene further participated in a test of parenting behavior and achieved a high score, but the child psychologist marked Eugene’s excessive complimenting as an area of improvement. Son Jung Sun stated, “You give excessive compliments at the smallest of things. This is where problems can occur. Rohee is used to her mother complimenting her on everything, but other people don’t, so if she doesn’t receive compliments, she won’t do things out of disappointment.”

When Eugene asked to what extent she should be complimenting her daughter, Son Jung Sun said, “It varies depending on tendencies and personalities. If you examine the extent to which Rohee listens to you, you can establish a standard and adjust to it.”

Rohee
Eugene
S.E.S.
How does this article make you feel?