Jung Ga Ram from Netflix’s original series “Love Alarm” sat down for an interview to talk about his co-stars Song Kang and Kim So Hyun.

Based on the popular webtoon of the same name, “Love Alarm” is a romance drama set in an alternate reality where people find love through an application that alerts users when someone within a 10-meter radius has feelings for them. The drama tells the story of three young men and women who face a world in which people can only express their love through the app.

In “Love Alarm,” Jung Ga Ram takes the role of Hye Yeong, who has to take a step back for Jo Jo (Kim So Hyun) and Sun Oh’s (Song Kang) budding romance to develop, but he can’t give up his feelings for Jo Jo, whom he liked first.

Jung Ga Ram shared his satisfaction for the drama, saying, “I was a fan of the original webtoon. I really enjoyed the webtoon, so I was curious how the drama would turn out. The CG was awesome, and the story of Jo Jo and Sun Oh was fun.”

The actor was especially interested in Hye Yeong’s character when he auditioned for “Love Alarm.” He said, “I thought a lot about the character Hye Yeong while watching the webtoon. But when I played Hye Yeong, it was different. Since it was such a popular webtoon, it became a burden in a way. I talked a lot with the director, and I tried to express it just the way I felt.”

When asked if he would choose love or friendship, the actor candidly answered, “Love. I thought maybe I should choose friendship, but I’m going to pick love. I don’t know if friendship is any better.” 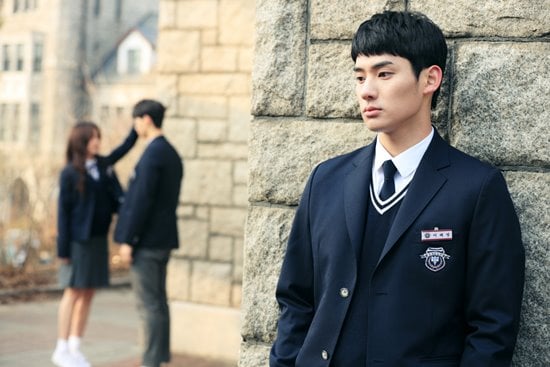 Jung Ga Ram also talked about working with Kim So Hyun and Song Kang. About Song Kang, he said, “I talked to Song Kang a lot. Since we are in a position where we’re working together, we talked a lot about each other’s concerns. There were life stories and acting stories. We shared a lot of stories, and in the end, we ended up with ‘Let’s work hard together!'”

As for his acting senior Kim So Hyun, he said, “When Kim So Hyun was reading the script, she definitely had a mature feeling. I was able to talk about my worries in acting, and that’s how we connected. She’s usually very serious. She’s a really great actress. Song Kang and I talked a lot with Kim So Hyun.”

After debuting in 2012, Jung Ga Ram is slowly gaining attention as an actor after appearing in a series of big works over the years. However, he shared that the more he acts, the more difficult it becomes. He confessed, “There was no answer. When I act with my seniors, I feel like I’m lacking a lot. I wonder, ‘Can I act until then? When can I act as well as they do?’ I’m very grateful I’m able to be in so many projects. I think I’m slowly getting better now. I try to do my best every moment. And I keep trying to make myself better. Maybe that’s the only way I can survive. I’m so happy to work.”

Thanks to his acting career, Jung Ga Ram naturally earned the label “Chungmuro’s Rising Star.” The actor commented with laughter, “I was eating with my seniors before, and they complimented me by calling me a ‘rising star.’ Then another senior actor said, ‘There are 30,000 rising stars in our country.’ I don’t really have any thoughts about being called a ‘rising star.’ I just think I should work hard. I’m still in the stage of showing and proving. When I’m in my 20s, I want to appear in more diverse works.”

He continued, “I don’t feel like I’ve been acknowledged yet. I’m still at the stage where I have to show myself more and prove my abilities. I’d like to do more diverse works. What will I be like in ten years? I think I’ve had a lot of good fortune to have kind friends while doing this work. So I want to be warm to people around me. I would rather be a mediocre person with warmth than a special person without it.”