On the latest episode of MBC’s “The King of Mask Singer,” the identity of contestant Snail Bride was revealed!

During the September 1 episode, Snail Bride faced off against contestant Young Goo to determine who will rise as the candidate for the King round. Young Goo sang Lee Sora’s “Please,” while Snail Bride impressed the audience with her cover of Sung Si Kyung’s “Hee Jae.”

Unfortunately, Young Goo moved on to the final round with 71 votes to Snail Bride’s 28 votes. Snail Bride remained on stage to reveal her identity. 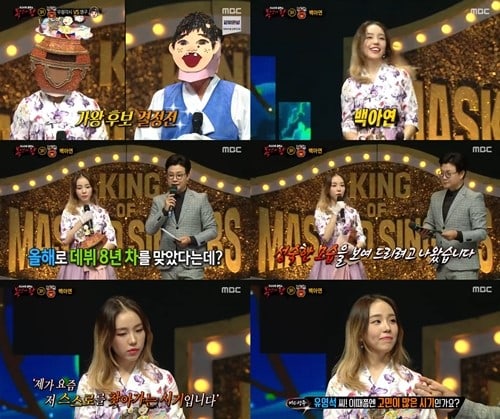 Snail Bride turned out to be Baek A Yeon!

Baek A Yeon shared, “It’s been eight years since my debut, but many people seem to remember my audition, so I wanted to display a more mature side.” The singer previously appeared as a contestant in the SBS survival show “K-Pop Star.”

She continued, “I’m currently taking some time to find myself. I’ve kept singing ballads until now. Because of my quiet and upright image, I’ve become conscious of this even to my family. I’m currently trying to find a more natural image these days.”

Following the broadcast, Baek A Yeon took to Instagram to write, “This week’s ‘The King of Mask Singer’ Snail Bride turned out to be… me, Baek A Yeon!”

Baek A Yeon
The King of Mask Singer
How does this article make you feel?