The September 5 broadcast of the program carried on from the first episode and brought the hit song performances of AOA, Lovelyz, Oh My Girl, and (G)I-DLE.

First to take the stage was Oh My Girl. Ahead of their performance, Binnie relayed her nervousness, saying, “It’s a performance we’ve never tried before and we changed our sound, so I’m really anxious.”

Leader Hyojung stated, “We’re now at the level that are songs are known. I’m really curious whether the audience will recognize our song. I hope they will rethink Oh My Girl and acknowledge us.”

After debating between their most recent song “The Fifth Season (SSFWL)” and the song that earned them their first win, “Secret Garden,” Oh My Girl ultimately decided on “Secret Garden.” The group gave an ethereal performance that was accented by their black outfits and the use of a red ribbon.

While watching the stage, MAMAMOO said they were reminded of Christmas, and AOA commented, “I feel like my heart is becoming more peaceful” and “It’s like a fairy tale.”

Next up was (G)I-DLE, who exploded onto the K-pop scene with songs such as “LATATA,” “Han,” and “Uh-Oh.” The group chose to perform their debut song “LATATA,” which earned them their first win and a rookie award.

(G)-IDLE’s performance opened with Minnie reciting a narration in Thai and they gave off a majestic vibe that showcased the members’ charisma and captured the attention of their senior artists.

Lovelyz was next on stage with their song “Ah-Choo.” Diverting from their usual sweet image, the group showcased a sexy side of themselves that enraptured the audience. Mijoo and Yein particularly drew attention for their powerful dance break, and it was revealed that they practiced to the extent that their knees were bruised.

Finally, AOA closed the show with a performance of “Short Skirt.” After their “Bingle Bangle” comeback, the group had faced a long hiatus period and were reduced to five members. Jimin stated, “Since it’s our first time performing as five, I was emotional and nervous. I feel like there will be a lot of concerned eyes on us, so I hope we can show that we can still do well.”

In their performance, AOA showcased their signature sexiness. The group’s dance break in which they utilized chairs and were split on two stages wowed both the audience and their fellow artists. Park Bom expressed her surprise by saying, “They’re all doing so well,” and (G)I-DLE’s Yuqi commented, “They’re so cool.”

Following the stages, the first rankings were announced. The points each group could earn were based on three categories ⁠— special judge panel votes, self-evaluation votes, and audience votes. 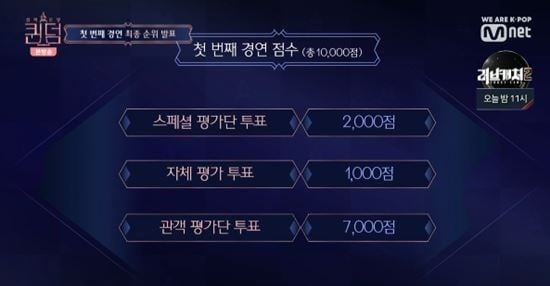 In the first category, idol trainees made up the special judge panel, and (G)I-DLE and MAMAMOO were the front runners. With a three-vote difference, (G)I-DLE ultimately took the category and earned 2,000 points.

In the self-evaluation category, Oh My Girl received the lowest amount of votes, and Hyojung commented, “I got teary-eyed from the uneasiness.” 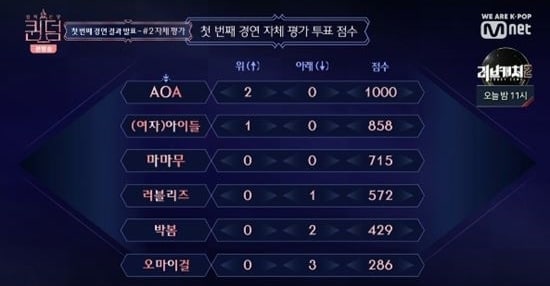 After all votes were combined, (G)I-DLE came out on top. Miyeon stated, “It feels great, but there is also the burden of having to do better next time. I think we will have to work even harder.” 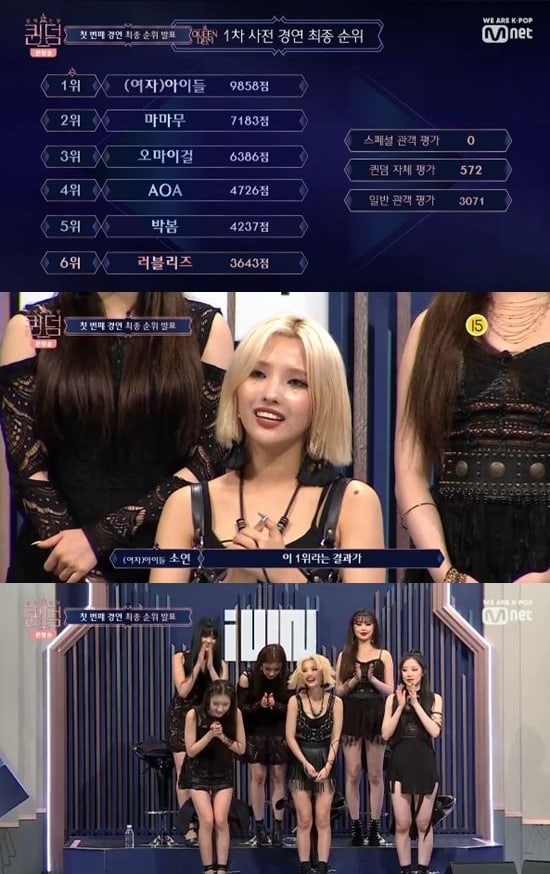 MAMAMOO came in second place, while Oh My Girl took third place. Upon hearing this, Hyojung showed tears of happiness and said, “[‘Secret Garden’] is a really special song to us. I was afraid that we might come in last with our first-win song.”

AOA was ranked fourth, and Park Bom came in fifth place. Lovelyz took last in the rankings, and Mijoo conveyed her disappointment, saying, “I’m a bit hurt. I even got bruises while preparing [but we ranked last].”

“Queendom” airs on Thursdays at 9:20 p.m. KST, with the groups going head-to-head in a cover song competition next week.