“Flower Crew: Joseon Marriage Agency” tells the story of King Yi Soo (Seo Ji Hoon) who makes a request to Joseon’s best matchmaking agency Flower Crew to protect his first love. Upon his request, the matchmakers at the agency risk their own lives to transform the lowly woman Gae Ddong (Gong Seung Yeon) into the most refined noble.

In a previous teaser, Gae Ddong and Yi Soo proved their love for one another as Gae Ddong remarked, “Yi Soo and I are family. No matter what happens, he’s always on my side.” Yi Soo also stated, “Gae Ddong has the most beautiful face in Joseon,” and was determined to marry his first love. Although he asked the Flower Crew for their help, he was forcibly taken to the royal palace on the day of his marriage with Gae Ddong. As Yi Soo discovers his royal lineage, his relationship with Gae Ddong is expected to unfold in unpredictable ways. 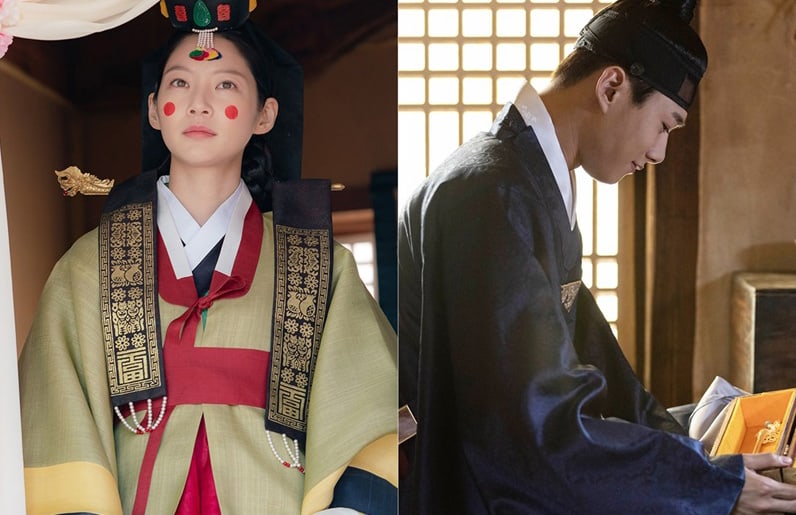 In the new stills, Yi Soo gives Gae Ddong an intimate piggyback ride and prepares for his wedding with the feisty girl as he looks down at an ornamental hairpin fondly. Gae Ddong also wears a traditional wedding outfit and is visibly nervous for her big day. The new stills depicting Yi Soo and Gae Ddong’s romantic relationship are raising expectations for the first broadcast of the couple’s marriage project.

“Flower Crew: Joseon Marriage Agency” premieres on September 16 at 9:30 p.m. KST and will be available on Viki with English subtitles.