The upcoming music romance variety show “Love at First Song” has given potential viewers an exciting glimpse of what’s to come!

XtvN’s “Love at First Song” features people being matched up in pairs to rehearse and perform a duet together. The twist is that they have to prepare and perform without seeing each other’s faces. Once they find out what each other looks like after performing their duet, they can decide if they want to take the further step of becoming a couple.

The show is hosted by MC Kyuhyun of Super Junior, and Gummy, Sung Si Kyung, and Yoon Sang play the role of “heart makers” who evaluate the couples’ chemistry.

On September 10, a poster was shared for the show that features the celebrity stars and the text, “Love starts when the music starts!” 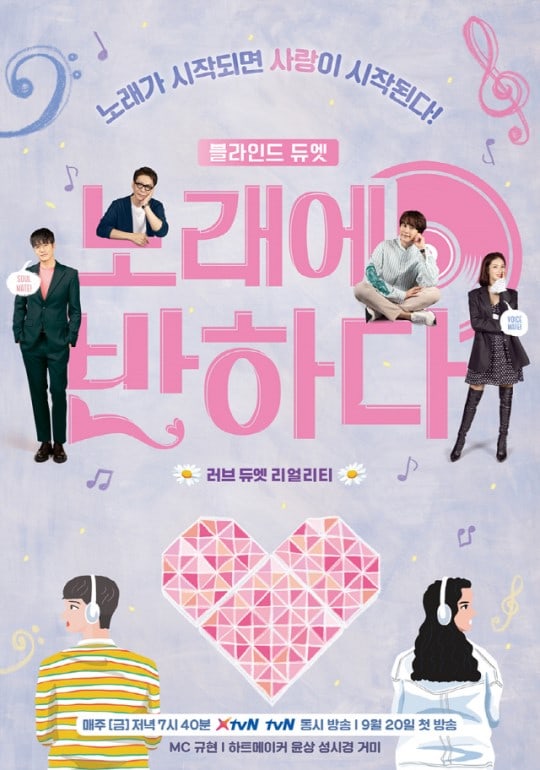 A teaser also shows what to look forward to, beginning with Kyuhyun introducing the show and a couple trying to sneak a peek of their partner. Gummy says excitedly, “They must be so nervous!” Yoon Sang comments, “We can see everything but those two can’t see each other.”

The preview explains that if the “heart makers” are moved by the pair’s performance, then the blind between them lifts.

The program was developed by CJ ENM in 2017 and first appeared in overseas markets including Vietnam and Malaysia. In the United States, the “American Idol” production company and singer John Legend are developing an American version of the show. There are also versions of the show in talks for Australia, Denmark, England, and more.