The drama, which stars Ji Chang Wook and Won Jin Ah, is about a man and a woman who participate in a project where they’re to be frozen for 24 hours. But due to a mysterious scheme, they end up waking up 20 years later. As a side effect of the 20-year freeze, the two must maintain a core body temperature below 33 degrees Celsius (approximately 91.4 degrees Fahrenheit) to survive, but when their bodies heat up from romantic attraction, they find that there’s more than love on the line.

Bomin plays the college student Hwang Ji Hoon, who meets Go Mi Ran (played by Won Jin Ah) one day in class. Because Go Mi Ran was frozen for 20 years, she still looks like she’s in her 20s, although she still has a 90s sentiment and is 20 years older than Ji Hoon. Ji Hoon teaches Go Mi Ran what “some” means (the period of attraction before two people are actually dating) and is assertive in pursuing her.

A source from the drama said, “Bomin, who won over viewers in the web drama A-TEEN, will be showing a whole new set of charms as Ji Hoon.”

“Melting Me Softly” premieres September 28 and will be available on Viki with English subtitles. 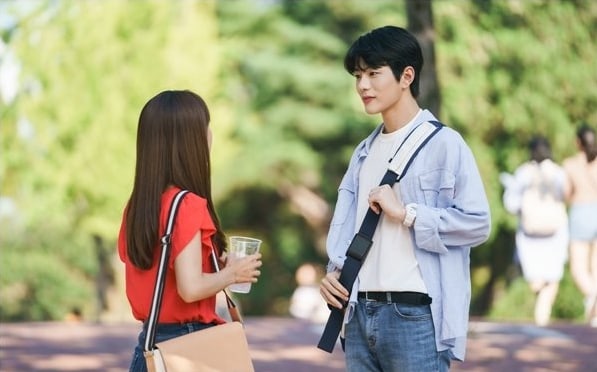 Golden Child
Bomin
Melting Me Softly
How does this article make you feel?