Park Bo Young showed her support for Im Joo Hwan and Lee Sun Bin by sending a sweet surprise to the set of their new drama “The Great Show”!

On September 11, Im Joo Hwan revealed on Instagram that his former “Oh My Ghostess” co-star Park Bo Young had sent a coffee truck to the set of his new tvN drama.

In addition to a cute photo of Im Joo Hwan and Lee Sun Bin, the truck bore a banner that read, “To the cast and crew of ‘The Great Show,’ please enjoy [the coffee]. Good luck, actors Lee Sun Bin and Im Joo Hwan! From Park Bo Young.” Another message read, “Both of you, find strength!”

Just two minutes later, Lee Sun Bin similarly expressed her gratitude in her own Instagram post. The actress wrote, “Kyah [a sound indicating excitement]!!! Our lovely Bo Young sent a touching gift for the team of ‘The Great Show,’ who is working hard even during the [Chuseok] holiday. Thanks to you, we were all able to gain strength during filming. Thank you, unnie. I love you!!!!!!”

Lee Sun Bin also shared several photos of herself posing in front of the truck, including a cute selfie that she took with her co-star VIXX’s Hyuk—who later commented on the post with a winking emoji. 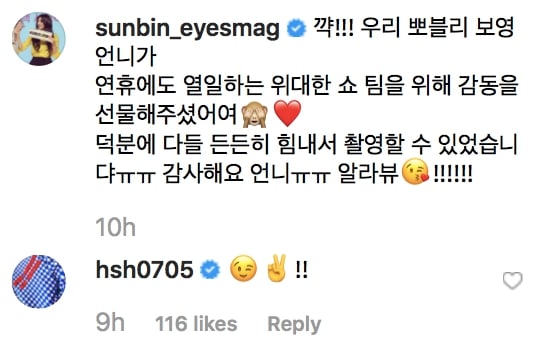 Check out the latest episode of “The Great Show” with English subtitles below!