During the September 11 episode of KBS2’s “Matching Survival 1+1,” former MBLAQ member Thunder, Lee Jin Ho, Kwon Hyuk Soo, and Kim Ki Bum appeared as guests. “Matching Survival 1+1” is a dating reality show that features young single men and women looking for romance as they shop at a market together.

Kim Heechul, the co-host of the program, was emotional about Kim Ki Bum’s appearance on the show and stated, “It’s been such a long time. I think I’m going to cry.” After happily greeting Kim Heechul, Kim Ki Bum gave an update on his life, saying, “I think I just stayed at home for an entire year.” 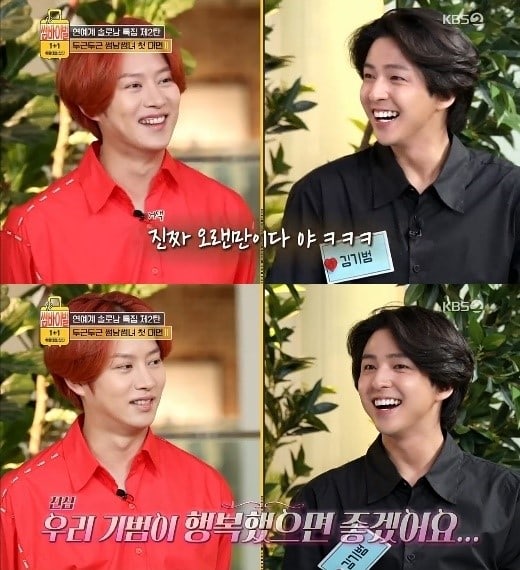 Lee Soo Geun commented, “Ki Bum is really sensitive. He’s also easily moved to tears. I hope he meets someone who makes him happy.” Kim Heechul added, “I really hope our Ki Bum can be happy.”

Kim Heechul later talked about how Kim Ki Bum hadn’t gone on blind dates before, saying, “When Kim Ki Bum lived with me…that was from 2006 to 2007, but during those times, I would always go out to nightclubs. After coming back from the nightclub, Ki Bum would be playing games at home, and he would make me hangover ramen. It’s already been over 10 years since then.”

When one of the female contestants expressed interest in Kim Ki Bum, Kim Heechul earnestly said, “Our Ki Bum. He’s really quiet and introverted, but he’s also really sincere. And unlike me, he doesn’t go out to play, and he doesn’t go to nightclubs either. Please look after our Ki Bum.”

Kim Heechul previously shared a photo and video clip on his personal Instagram account of his reunion with Kim Ki Bum. The two reminisced about their old nicknames and talked about growing older.