On September 13, Yeonjun turns 20 years old in Western reckoning, and he’s now celebrating his first birthday with fans since his debut with TXT in March. On Twitter, fans sent their love and celebrated the big day, leading to the Top 5 worldwide trending topics including both his name and the hashtag #연준아_사랑해_사랑달_사랑별 (a play on words in Korean that means “Yeonjun, we love you”). 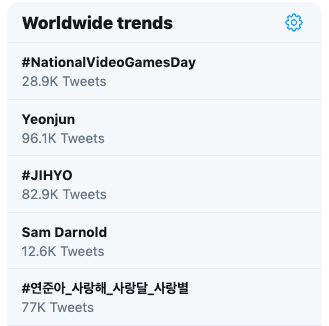 Shortly after midnight, Taehyun wished Yeonjun a happy birthday by uploading a video of the pair dancing together. He wrote, “Yeonjun, who I’ve been together with at Big Hit for the longest time” and added a heart. He went on to say, “I’m uploading this old short video because I remembered how we had fun dancing together. Happy birthday to our ‘crybaby’ Yeonjun, and I love you.”

He also shared two photos together with Yeonjun.

Hueningkai posted a group photo and wished a happy birthday to Yeonjun, describing him as a “cutie” and “the eldest who seems like the youngest.” He thanked him for always being reliable and added, “I love you.”

Yeonjun also revealed the surprise party that his members threw for him, with the five members sitting together around lots of food and a birthday cake. “I’m so grateful to my members who threw me a surprise birthday party, and I love you. I’m so, so happy.”

TXT
Yeonjun
How does this article make you feel?