The stars of KBS’s “I Wanna Hear Your Song” selected their favorite scenes from the drama as it nears its conclusion!

After the broadcast of the drama’s 24th episode last week, “I Wanna Hear Your Song” is barreling through its second half as the mysteries begin to come together and the relationships grow deeper. The main cast ⁠— Yeon Woo Jin, gugudan’s Kim Sejeong, Song Jae Rim, and T-ara’s Jiyeon ⁠— reflected on the developments thus far and shared their picks for the best scenes. 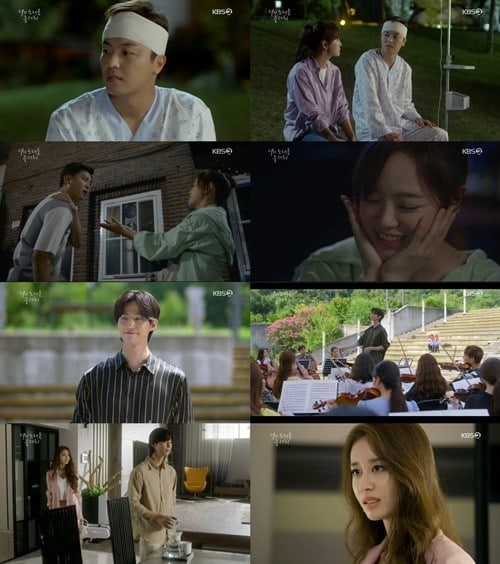 Yeon Woo Jin chose the “hospital bench confession” scene from Episode 17 as a memorable moment. His character Jang Yoon had almost suffered a large injury after being hit in the head, and through this event, he finally acknowledged his feelings for Hong Yi Young (played by gugudan’s Kim Sejeong) and frustratedly confessed to her, making viewers’ hearts flutter.

Yeon Woo Jin commented, “Jang Yoon had been denying his feelings for Yi Young out of guilt over his brother, but he liked her so much that he overcame that and confessed to her. He was calm on the outside, but deep down he was very earnest, so when I was acting, it left an impression on me.”

Kim Sejeong found the time she acted drunk to be the most fun. She brought big laughs to viewers as Hong Yi Young displayed a next-level drunken frenzy to Jang Yoon. She said about the scene, “Because drunk Yi Young is so cute, I was more excited while acting, and I made all the staff on set smile, which made it even more memorable.”

On the other hand, Song Jae Rim picked the “first outdoor concert” scene from Episode 7 as one he could not forget because of the hard work put in by all the actors, filming crew, and staff members. He stated, “It was made through everyone’s efforts and consideration for each other, so it turned out to be an even more beautiful scene.”

Finally, Jiyeon selected the scene when her character, Ha Eun Joo, throws a wine glass at Nam Joo Wan (played by Song Jae Rim) and says, “I’m not a robot. I’m human too. If you hurt me, I scar, and if you stab me, I feel pain.” She commented that the line was emotionally impactful to her and made her tear up while filming.

“I Wanna Hear Your Song” airs every Monday and Tuesday at 10 p.m. KST.