The winner has been announced on the final episode of tvN’s Chuseok variety program “V-1”!

Previously on September 14, the one-on-one battles between contestants continued to see who would make it to Round 2. Cherry Bullet’s Haeyoon, Weki Meki’s Sooyeon, and DreamCatcher’s Siyeon were in group A while WJSN’s Yoo Yeonjung, SONAMOO’s High.D, and Venus’s Jeong Da Kyung were in group A.

Haeyoon sang g.o.d’s “Where You Belong,” Ji Sooyeon showcased her vocal talents in SHINee’s “Y Si Fuera Ella,” and Siyeon performed EXO’s “Overdose.” Siyeon won 38 votes and moved onto the final round. She said, “I didn’t expect to be in the final stage, so I feel very overwhelmed.”

Yoo Yeonjung performed “Fine” by Girls’ Generation’s Taeyeon, Jeong Da Kyung sang The One’s “Dear Love,” and High.D touched viewers’ hearts with Lee Sun Hee’s “Fate.” Their talents were neck-to-neck, but Yoo Yeonjung successfully entered the final round with 36 votes. She shared, “I haven’t participated in many competitions or survival shows, but this is my first time making it to the final. That’s why I’m so nervous.”

In the final round, Siyeon sang Kim Gun Mo’s “Moon of Seoul” while Yoo Yeonjung performed Lena Park’s “In Dreams.” At the end, Yoo Yeonjung was named the winner with 58 votes!

Yoo Yeonjung commented, “My mom was more worried than I was. She said I would do well if I just face it, and it came true. I’m grateful.” 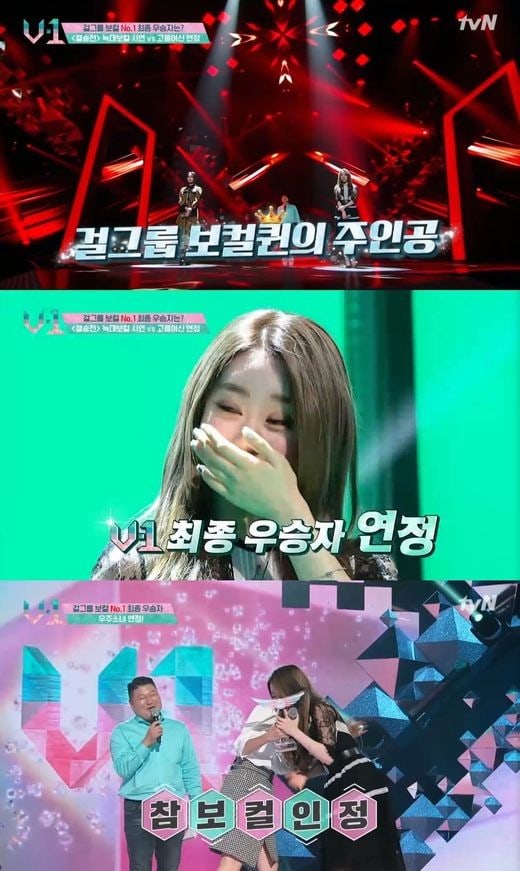 Shortly afterwards, Yoo Yeonjung thanked her fans on WJSN’s official Twitter account, saying, “Did you watch well, Ujung [fanclub name]? I was really happy to perform songs I wanted to perform for you guys. Thank you to ‘V-1’ who gave me a great opportunity, the VIP panelists who listened to my songs and chose me, and Ujung!”