When a listener wrote in to ask about Hayoung potentially hosting her own radio show, Hayoung said, “I want to. I heard that it’s hard to host a radio show. I’ve heard that you need to receive love and interest from a lot of people, so I think I should do it after I’ve raised more awareness about myself. But if I were to be invited, I’d definitely want to do it.”

Another listener asked which junior artists have caught their attention. Hayoung said, “I want to take care of the juniors at our agency. The reason for that is when we first debuted, BEAST took care of me a lot. So I want take care of our agency’s juniors like VICTON and Fave’s Boys.” Plan A Entertainment and Fave Entertainment merged earlier this year into Play M Entertainment, meaning Apink, VICTON, and Huh Gak are now in the same label as the group of trainees previously known as Fave Boys.

When asked what kind of show she’d like to appear on, Hayoung said, “I want to be on a show about soccer. I want to try being a reporter or a commentator.” 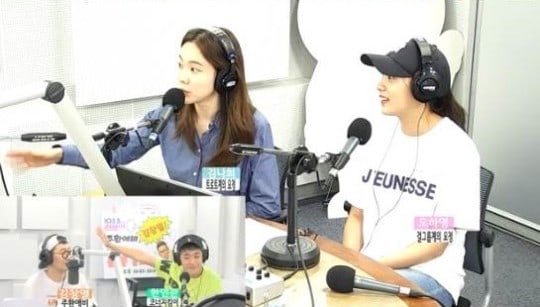 Hayoung was also asked if she meets up often with her friends who were also born in 1996, and what they get up to. Hayoung replied, “I’m friends with Red Velvet’s Joy and GFRIEND’s Yerin, who are my 1996 same-age friends. We even made a name for our group.” She shared that they decided to call themselves “Oh Jung Park group,” which combines their family names.

“When we meet up, we eat and chat together,” she said. “We’re all the type to talk about ourselves really honestly so when we we talk, the time just flies by.”

Hayoung made her solo debut in August with “Don’t Make Me Laugh.” Fans of the friends were recently delighted to see Yerin send a coffee truck to support Hayoung and Joy as they promoted on music shows this summer.