So much romance, so little time. Every year, more and more amazing romantic K-dramas pile up on our to-watch lists, unwatched. We find ourselves distracted by the shiny, buzzy dramas that everyone’s GIF-ing, and we forget about that sweet little show that once looked so promising.

Often, it’s these unassuming little shows that are most rewarding to watch once we finally give them a chance. But who has the time to sift through a million obscure dramas in the hope that something decent will show up? For your convenience, here’s a little cheat sheet: seven underrated dramas that are worth that free weekend.

What do you get when you throw together Choi Jin Hyuk, Song Ha Yoon, and a big old heaping pile of Truck of Doom-induced amnesia?

A male lead of the tall and deep-voiced variety was always going to make a cute pairing with tiny, squeaky Song Ha Yoon, and thankfully these two have chemistry in spades. Throw in Lee Ho Won (Hoya) and Lee Joo Yeon being utterly extra as the second leads, and we’ve got ourselves a laugh-out-loud comedy to stay in all day with. Bonus points for hilariously inaccurate neuroscience.

Check out the first episode of “Devilish Joy”:

Go Kyung Pyo‘s first leading role didn’t get the attention it deserved. Maybe it was the not-so-glamorous setting that put people off? Little did we know, the daily lives of delivery people are a hotbed of compelling fluff. “Strongest Deliveryman” turns out to be a sweet, witty, and wise tale about a guy who always tries to save the world, even when it feels like the world is against him.

Chae Soo Bin is in her usual fine rom-com form, playing the kind of leading lady who isn’t afraid to put her own dreams first. And then we’ve got Kim Seon Ho as the icing on the cake, being disturbingly charming as the entitled chaebol second lead.

I know, I know, how could a Ji Sung drama be underrated? He and Han Ji Min are both fantastic here, playing a husband and wife with a long history that both divides and unites them over the course of different timelines.

This drama is a watchable mix of fun, light fantasy, and serious life lessons learned. It may seem at first that our couple are not the greatest people. Maybe they really should break up? That’s what makes it so satisfying as we watch them change in a real, nuanced way. In the end, we’re rooting for them to get a second chance.

Check out the first episode of “Familiar Wife”:

For “Dear Fair Lady Kong Shim,” Girl’s Day’s Minah disappeared under a black bob wig for a whole drama. I bet it was itchy and sweaty, sorry, Minah. But it was worth it, because that wig brought us Kong Shim, a one of a kind heroine who is always completely herself, even when she’d rather be anyone else.

This is also the drama where Namgoong Min, hot off the heels of his role as a hateful psycho in “Remember” casually revealed himself as a rom-com king. His character Ahn Dan Tae is a huge, adorable weirdo just like Kong Shim, and watching them slowly get it together is a treat. Let’s just pretend that last episode never happened, okay?

If you appreciate food, you will appreciate “Wok of Love.” Every episode comes with several delicious dishes to drool over, while 2PM’s Junho and Jang Hyuk complete the set menu. Both gentlemen bring an opposites-attract charm to this romance, which essentially has two first male leads.

Jung Ryeo Won is the third point in what is not so much a love triangle as a love constellation. At times, it’s hard to tell which of the three leads loves the other two more. It makes for a really nice break from all the angsty, predictable triangles that leave us rolling our eyes at our laptop screens. 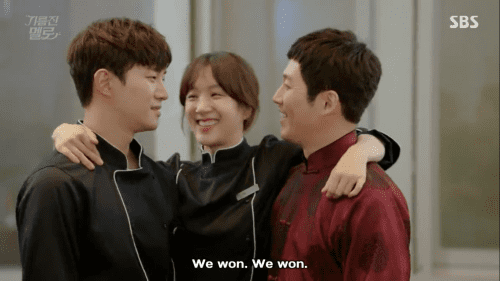 Check out the first episode of “Wok of Love”:

A recent addition to this list, “My Strange Hero” should have been the hit drama everyone was talking about. Yoo Seung Ho only amplifies the killer charm he’s been putting out since “I Am Not a Robot,” playing schoolyard superhero Bok Soo. Kwak Dong Yeon, meanwhile, kicks his talent up a notch with a mesmerizing performance as Bok Soo’s lonely, angry former classmate.

Jo Bo Ah gets our vote as a flawed yet idealistic teacher who isn’t always sweet and selfless. In fact, just about every character in this drama is lovingly and carefully crafted, including the supporting cast, which is loaded with familiar-faced veteran actors bouncing off each other.

Check out the first episode of “My Strange Hero”:

You were probably blinking when you missed “You Drive Me Crazy,” a four-episode mini drama about a French interpreter (Lee Yoo Young) and a painter with an unfeasibly nice house (Kim Seon Ho) who have been best friends since forever. Until, y’know, they, er, whoops, and EVERYTHING CHANGES.

This sudden storm in the lives of our leads is handled with warmth, hilarity, and several adorable moments with a hedgehog. Yes, a live hedgehog is part of the cast, in a pivotal role, I might add. He’s basically the third male lead. When will your fave K-dramas ever have that?

Check out the first episode of “You Drive Me Crazy”:

Which underrated K-drama would you recommend? Let us know in the comments below!

Azra_A spends her waking hours waiting patiently for 2PM’s next comeback (roll on 2021!). She relies on sheet masks and weird ice cream flavors to help her endure (cucumber is great, ceylon is better). When she’s not watching the comeback clock, you’ll find her on Instagram.

Currently watching: “Strangers From Hell,” “When the Camellia Blooms”
All-time favorite dramas: “My Love From the Star,” “Healer”
Looking forward to: “Melting Me Softly,” “Extraordinary You”