A new making-of video for “Flower Crew: Joseon Marriage Agency” has been released!

They officially start to film the scene, but when they gaze into each other’s eyes, their lips tremble with smiles, and they eventually burst into laughter. Kim Min Jae sweetly brushes the petals out of her hair, and they end with good spirits.

In another scene, Kim Min Jae attempts to pull out Gong Seung Yeon’s bun but is unsuccessful, making her laugh. His second attempt is successful, but he fails to tie her hair, and eventually the director calls to end the scene. Gong Seung Yeon tries to cheer up the disheartened Kim Min Jae and jokes, “You never tied someone’s hair before. What were you doing all this time?” Kim Min Jae replies, “There was no reason why I had to,” and Gong Seung Yeon teases him, “He’s just pretending he can’t.”

Next is the group hug scene with Kim Min Jae, Byun Woo Seok, Park Ji Hoon, and Gong Seung Yeon. Park Ji Hoon gets flustered by the hyperactive Gong Seung Yeon who clings onto him, and he eventually runs away from her. Fortunately, the scene is successfully filmed, and the director calls “cut” with approval. 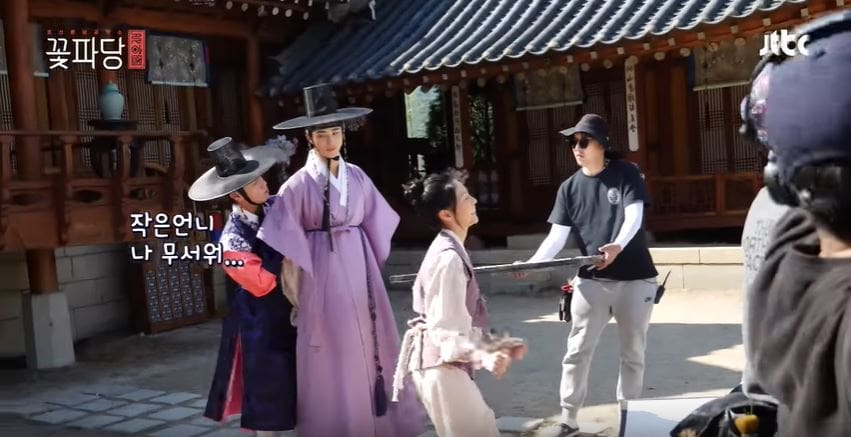