BTS, ARMY, And More Are Slaying The “Chicken Noodle Soup Challenge” After J-Hope And Becky G Drop Their Collab

On September 27, BTS’s J-Hope and Becky G’s new collaboration “Chicken Noodle Soup” was dropped and the “CNSChallenge” began. Fans have been encouraged to try doing the choreography for the track themselves and share it on TikTok!

As fans celebrate the new release and give the challenge a try, the top worldwide trending topics on Twitter have been swept by “Chicken Noodle Soup,” with leading topics including #ChickenNoodleSoup, #JHOPExBeckyG, #CNSChallenge, and Hoseok and Hobi (J-Hope’s real name and nickname). 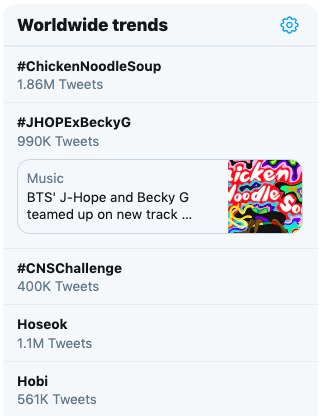 J-Hope shared his own video for the CNSChallenge on BTS’s TikTok channel.

And while J-Hope did a live broadcast on Naver’s V Live after its release, he was visited by fellow members Jungkook and V who took on the challenge too.

Check out some of the #CNSChallenge tweets from fans below!

it looks bad rn but might as well learn it since im already awake ?? #CNS #CNSChallenge pic.twitter.com/cUKc0qYVJq

It’s really 3am and I have class tomorrow morning ?? #CNSChallenge #cns pic.twitter.com/MphVAAJdcl

Meanwhile, some ARMYs are questioning if the choreo is really as easy as J-Hope suggests.

Hobi giving dance lessons but sweetie, you can teach it all day long but my body dont allow me tonmove like that#JHOPExBeckyG #ChickenNoodleSoup #CNSChallenge @BTS_twt pic.twitter.com/8PY3vEm4RL

this is hoseok posting his #CNSChallenge expecting us to follow suit pic.twitter.com/N8BszoGCXM

While others are having fun finding other ways to take part.

me and other armys who can’t dance, thinking of a creative way how to do the challenge w/o actually the need of dancing it: #CNSChallenge pic.twitter.com/o0vmuHMVpa

The CNSChallenge runs until October 4!

Have you tried the CNSChallenge?