Exclusive: Sung Hoon Talks About How Real “I Live Alone” Is, What It’s Like To Film The Show, And More

Sung Hoon was in Singapore on September 27 for a special event to meet with fans and members of the media. As one of the celebrities on the hit reality show “I Live Alone,” Sung Hoon’s appearance was among the first of many events leading up to this year’s Starhub Night of Stars award show on November 24. “I Live Alone” has been nominated for Favorite Variety Show.

The emcee kicked off the press conference by asking how has it been thus far filming “I Live Alone,” which is Sung Hoon’s first experience as a fixed member of a variety show. He said, “I started ‘I Live Alone’ with a comfortable mindset and after doing it, I became more comfortable because I’m actually telling people how I live my normal life. I think the biggest reason why the show is a hit in Asia is because of Henry. He is really popular.”

Sung Hoon went on to add, “Each and every celebrity on ‘I Live Alone’ has a very distinct character, which makes the show very fun. The program is not scripted and shows a lot of our genuine sides, that’s why fans enjoy our show.” 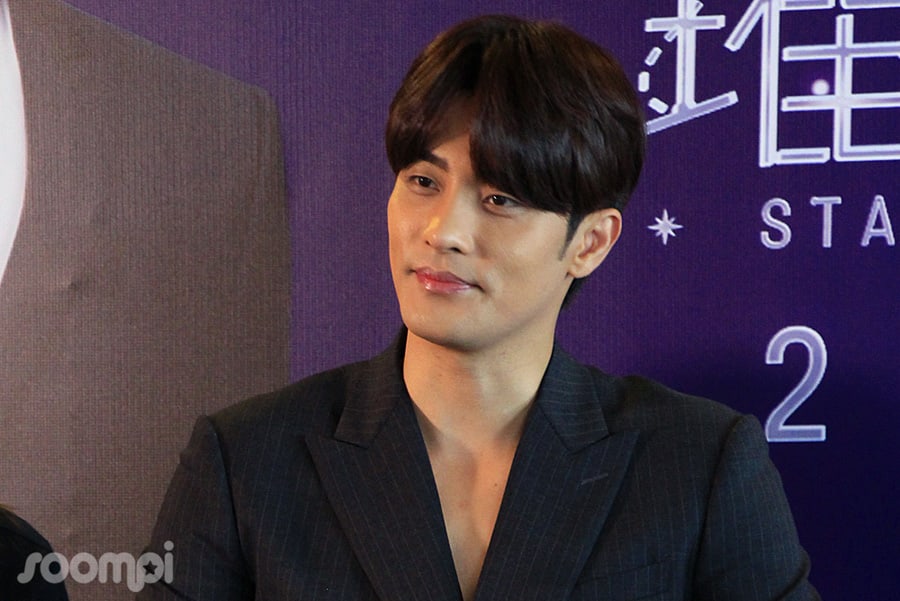 Sung Hoon has been to Singapore several times in the past, including visits for a fashion show, photo shoot, and filming for “I Live Alone.” He was asked how it felt to be back in Singapore this time, with plans for him to meet fans later that evening.

Sung Hoon answered, “At that time, I was here for work, so I didn’t get to enjoy Singapore. Today, as I’m sitting here, I do feel like I’m working, but I’m meeting the fans later so I think I’m here to have fun with the fans rather than just work.”

Another question was about his choice of variety shows such as “Law of the Jungle” and “Running Man.” He was asked what made him take on “I Live Alone,” which is a very different show.

He replied, “Whether it’s ‘Law of the Jungle’ or ‘Running Man’ that I appeared on, they are really similar with ‘I Live Alone’ as they are not filmed on a set and require me to make the show within a reality show concept. ‘I Live Alone’ was really comfortable for me as I can show my whole day and how I live.”

Of all the different celebrities’ lifestyles on “I Live Alone”, which lifestyle does he admire the most and wish to have for himself? He revealed, “I have never wanted to own or copy anyone’s lifestyle before. Because I put a lot of attention into how I live, I’m slightly more normal in terms of my lifestyle. But if you were to ask me to choose somebody who has a similar lifestyle, I would choose Kian 84.” 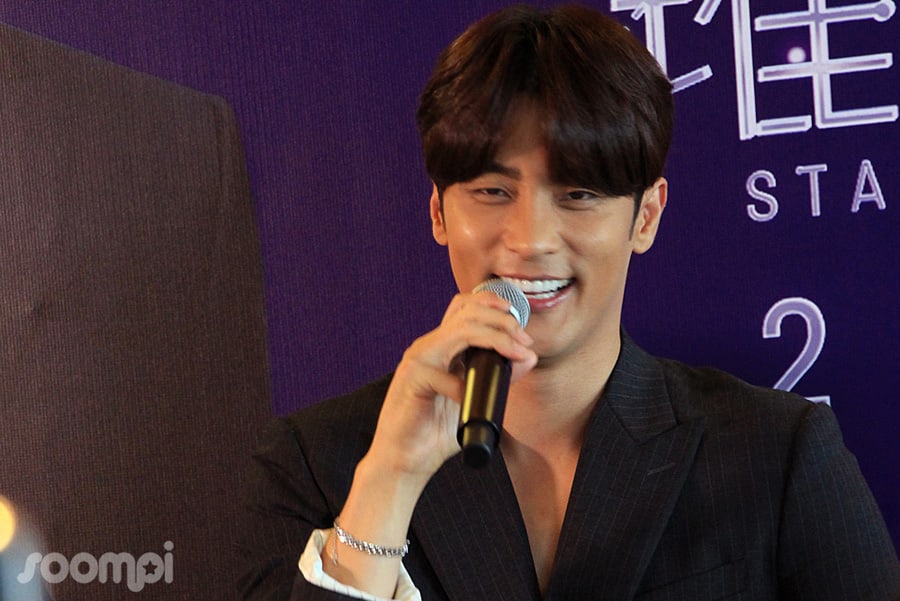 When fans think of Sung Hoon, his huge appetite often comes to mind. Fans might have hoped he would start a mukbang (eating broadcast) channel, but Sung Hoon is in fact considering starting something more than that. Sung Hoon said, “It wouldn’t be a mukbang channel but more of a lifestyle channel. To show how I live, to give better content to my fans, and to communicate with them. It’s not something that will happen immediately but we are thinking about it.”

The media was also curious to know how Sung Hoon adjusts to the filming of “I Live Alone” and having cameras in his house.

Sung Hoon shared, “During our first meeting with the ‘I Live Alone’ team, I informed them that if I were to create a certain image on the show, it would not be something that I want to do. The team also said that they want to show me as myself. That’s why it was comfortable for me to film ‘I Live Alone’ at my house as I wouldn’t have to pretend that I’m a certain person or say something that makes me have a certain image.”

Sung Hoon was asked about the music genres that he enjoys listening to when he’s alone. Sung Hoon shared, “I don’t have a specific music genre that I really like, but if you are asking about the music I don’t listen to, it’s hip hop. As for electronic dance music, pop, and other Korean music, I put them on shuffle.”

In relation to the topic of music, Sung Hoon was also asked if he would be releasing a song soon and whom he would want to do a duet with.

Sung Hoon said, “I was depicted to be slightly funny and silly in terms of the song that I did. But the reason why I put out this album was not to make money off it. I want to have fun with my fans through the album. We can sing together and it’s a great communication process. In future, if I feel the need to sing with my fans to have fun, then maybe I would consider it but absolutely not at the moment.” Sung Hoon went on to reinforce his reply in English, “absolutely no,” to the amusement of the media. 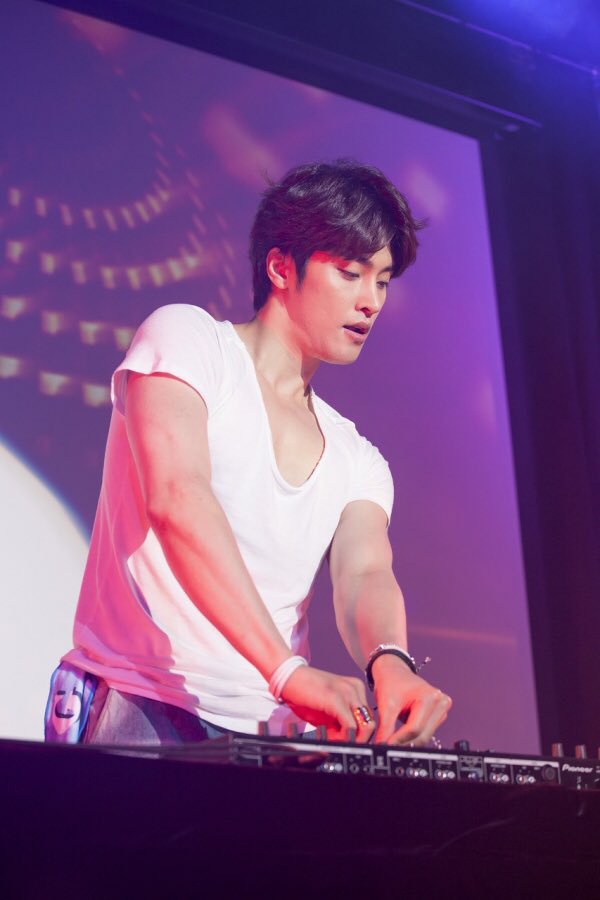 Sung Hoon also goes by the name of DJ Roiii when he gets behind the turntable as a DJ. When asked if he would like to star in a drama about a DJ, Sung Hoon said he isn’t sure as he doesn’t know if anyone wants to watch such a drama. He explained, “If the script is well-made and the drama is really fun, then I would want to try it. But I don’t know if a drama relating to a DJ is going to be fun for the viewers. It would be a factor that I have to consider.”

Having mostly played rich and handsome businessmen in his drama projects such as “New Tales Of Gisaeng,” “Noble, My Love,” and “My Secret Romance,” if Sung Hoon were a CEO in reality, what is the first thing that he would want to do?

He said, “I have never been that rich. The first drama role I had was of a CEO, and the ratings were good and the drama gained a lot of popularity. Maybe that’s why I keep getting cast in similar roles. If I become really rich now, I want to get a private jet so I can fly around with my pet, Yang Hee. Now, Yang Hee can’t go into a cage [due to her fear of confined spaces] so she can’t fly here with me. I want a private jet so we can fly around and travel together. If Yang Hee could take a plane, I would have brought her here.” The emcee joked that it’s a hint to the event organizer. Sung Hoon took that idea and made everyone laugh with his question, “How much of my fees do I need to sacrifice?”

Watch the latest episode of “I Live Alone” now!