EXO’s Chen shared his thoughts on his solo promotions and more!

On October 2, the idol appeared as a guest on MBC FM4U’s “Kim Shin Young‘s Hope Song At Noon.”

On the previous day, Chen released his second solo mini album “Dear my dear” and title track “Shall we?”

At the listening session for his latest release, fellow EXO member Sehun appeared as the MC. “There are many official MCs at our agency, but I felt sorry to ask them and felt [awkward] contacting them when I wasn’t close with them,” said Chen. “I felt sorry saying anything to the members since they’re all in the middle of promotions. I was going to do it alone, but Sehun heard about it while going to another scheduled event and said that he would do it. I was moved.”

He continued, “Through this, I learned that Sehun is someone who’s good at speaking. Even though it was an abruptly scheduled event, I was grateful that he did such a good job.” Chen added that he would appear as the MC for Sehun if he releases a solo album.

When a listener commented, “All of the titles and lyrics in this album are in Korean,” Chen explained, “I said I thought it would be good if only Korean lyrics went up when the new music is uploaded on Korean album websites.”

The DJ asked, “I heard that there was a time when you won against [lyricist] Kim Eana. Is that true?” Chen answered, “That’s not true. I asked many lyricists and I also participated because I felt ambitious. Ultimately, my lyrics were chosen through a blind test. It was a big honor.” 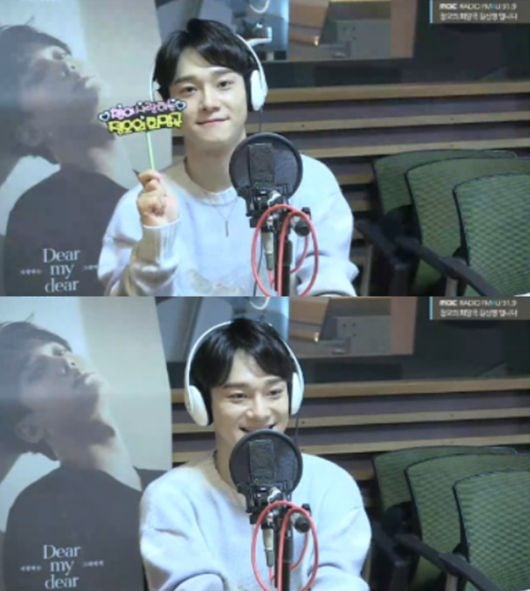 Another listener commented, “You feel like the 21st century Lee Moon Sae,” and Chen replied, “Thank you. For the last album and this album, I listened a lot to Lee Moon Sae’s songs and used them as references. Like him, I want to love music for a long time and continue music with endless passion.”

The EXO member was then asked to choose a junior artist who draws most of his attention these days. Chen said, “As someone who also works in K-pop, I get surprised when I see juniors at places like music shows. I learn a lot. In SM Entertainment, I personally want to choose NCT’s Taeil from the vocal line. His voice is so good.”

He added, “I can’t dare choose someone, but I want to cheer him on as a colleague with the same job.”

The DJ also brought up the possibility of a solo concert. “I want to do it as well, but EXO comes first so that’s what I want to focus on,” stated Chen. “I learn a lot while [promoting]. It also fits my personality to focus on only one thing at a time.”

Check out the MV for Chen’s title track “Shall we?” here!

EXO
Kim Shin Young's Hope Song at Noon
Chen
How does this article make you feel?