Kim Hye Yoon Talks About Working With SF9 Members, APRIL’s Naeun Shares Her Reaction To Being Cast In “Extraordinary You”

On October 2, MBC’s new Wednesday-Thursday drama, “Extraordinary You,” held a press conference with its cast and crew.

Based on the webtoon “July Found By Chance,” “Extraordinary You” is about a female high school student who discovers that she is a character in a manhwa (Korean comic). Despite this realization, she decides to go against her predetermined fate and find true love.

At the press conference, director Kim Sang Hyub said that casting took over three months. “We picked actors who not only had the passion and ambition of rookies, but also a lot of potential. They work hard in order to improve their acting. I think that these actors will be ones to watch in the future.”

Kim Hye Yoon stars in the drama as Eun Dan Oh, the female lead. She said, “She’s very different from the last character I played [Ye Seo in ‘SKY Castle‘], so I had a lot of discussions with the director. I researched lovable characters and watched a lot of romantic comedies to prepare. I felt like I had left Ye Seo behind and was becoming closer to Dan Oh.”

SF9’s Rowoon is also playing a starring role, as a nameless extra in the manhwa whose life changes after he meets Eun Dan Oh. He said, “I don’t have a lot of experience, so I was worried about taking a lead role. It made me anxious. I was even nervous about the fact that the drama’s title was changing from the webtoon title. But after the first script reading, Hye Yoon said to me, ‘It would be good if you could have fun even while feeling anxious.’ So that’s what I’m doing.”

Kim Hye Yoon was asked about working with two different SF9 members, having previously starred opposite Chani in “SKY Castle.” She said, “They each have their own appeal. They’re both similar in age to me, so it was easy to match up.”

When asked to choose between them, she said, “Rowoon is next to me right now and he’s watching me, so I’ll pick him.”

APRIL’s Naeun, who plays Yeo Joo Da in the drama, said, “When I first got the role, I was excited because I thought I was playing a lead role.” Yeo Joo Da is the female heroine of the manhwa that Eun Dan Oh finds herself in and has all the characteristics of a classic manhwa heroine.

Naeun continued, “But I don’t think that you have to be the lead to be happy. Yeo Joo Da is a very authentic character, and has a lot of similarities to what you’d expect from a typical heroine. But you also see a unique side of her, so please tune in until the end.” 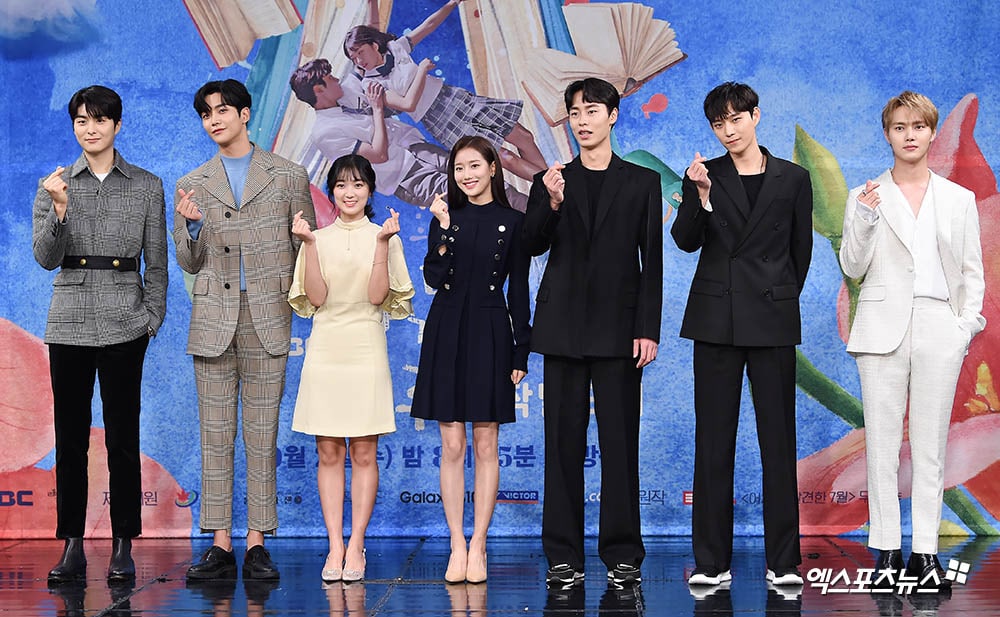 “Extraordinary You” premiered on October 2 at 8:55 p.m. KST and is available to watch on Viki.