On October 7, the show featured Kangnam organizing an event so that he could officially propose to Lee Sang Hwa. It is common in Korea for couples to decide to get married and begin preparing for their wedding before staging a proposal event, which is what happened with Kangnam and Lee Sang Hwa.

Kangnam surprised Lee Sang Hwa by giving her a pedicure at home, and he painted her toenails with a red polish. At first she seemed nervous, but she was soon praising him for how well he was doing. 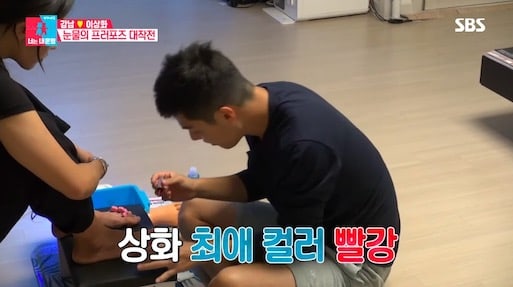 Kangnam then told her not to look and tried to write “Marry me” on her toes in a white polish. When he let her take a look, she gasped and smiled. “It’s so cute!” she said. She then read the message on her toes out loud and replied, “Yes! I say yes.”

Kangnam explained in his interview that he’d chosen this idea for a proposal because as a speed skater, Lee Sang Hwa hadn’t been able to get her toenails done in 25 years, even though she likes to do nail art on her hands, and she also has some injuries on her feet. “That’s why I thought that it would be more meaningful to do a pedicure,” he said. 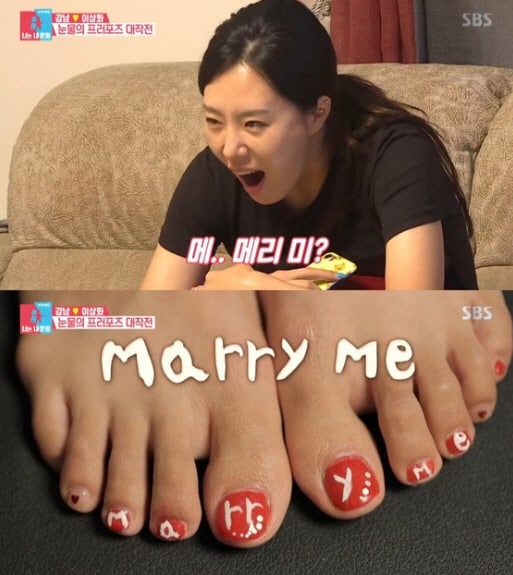 Kangnam also gave her a letter he’d written and presented her with a ring from his mother, which made her touched. While Lee Sang Hwa was thrilled, she teased Kangnam over how it seemed like he was hoping she would cry.

She explained in her interview, “He was so cute. To be honest, I was emotional so I wanted to cry, but I thought ‘I shouldn’t cry.’ The most touching thing was that even though he’s not good at spelling, he wrote a letter of several pages while thinking about me.”

Kangnam and Lee Sang Hwa first got to know each other when they appeared on SBS’s “Law of the Jungle” last year. They will be tying the knot on October 21, and they recently shared some beautiful wedding photos.