The stars of “Hotel Del Luna” showcased their friendship!

Jung Dong Hwan revealed, “I got the casting offer for ‘Hotel Del Luna’ when I was really busy with performances for a play. I filmed all night long at the same time as doing my play. The director personally came to see me and said that IU was appearing in it. I didn’t need to see the script. Because IU was doing it, I said that I would do my best.”

The two actors first met while portraying a father and daughter in “You Are the Best.” Jung Dong Hwan explained, “I’m not really the considerate type on set, but I guess IU felt warm fatherly vibes from me and always sent me gifts during the holidays after that. In return, I invited her to my plays and we continued our friendship.”

He continued, “My projects are on the abstruse side. Ordinary people don’t really like them, but IU sent me her thoughts after watching my play. Since IU was going to be the lead character, I did the project with the mindset of doing my best.” The actor then revealed the long text message he received from IU with her thoughts. 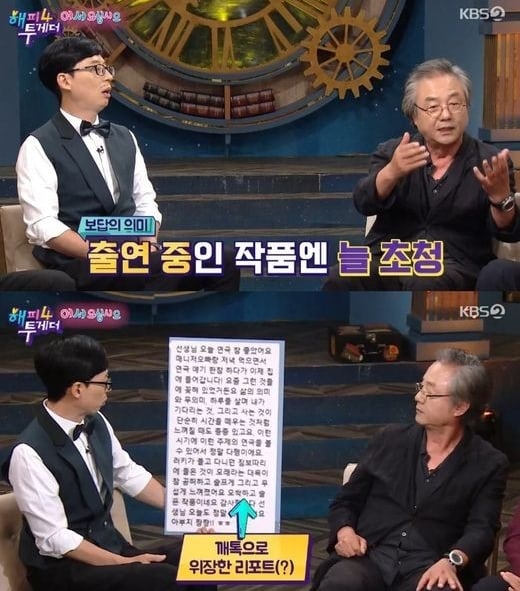 Speaking about her admiration for IU, Mina stated, “I grew up while dreaming of becoming a singer with IU as my role model. I felt so nervous about meeting her, so I took calming medicine at the script reading where I was meeting her for the first time.”

As for IU’s first impression, Mina said, “She read the script while sweeping her hair back. She was so pretty that I continued to stare at her.” 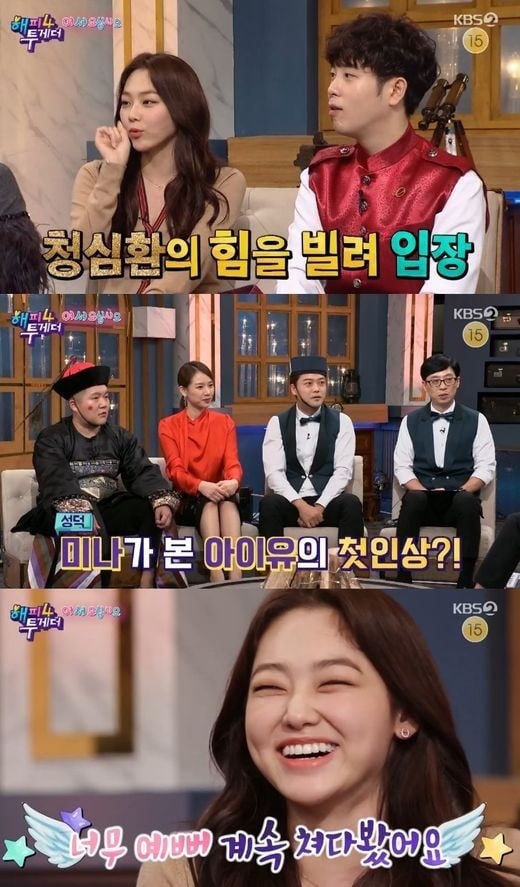 Despite being the same age as IU, P.O made everyone laugh by revealing that they still speak formally to each other. He explained, “We had a CEO-bell boy relationship in the drama. Because I got in the habit of that, I started speaking formally. I speak formally to her without my knowledge. I even call her ‘boss’ in unofficial settings.” 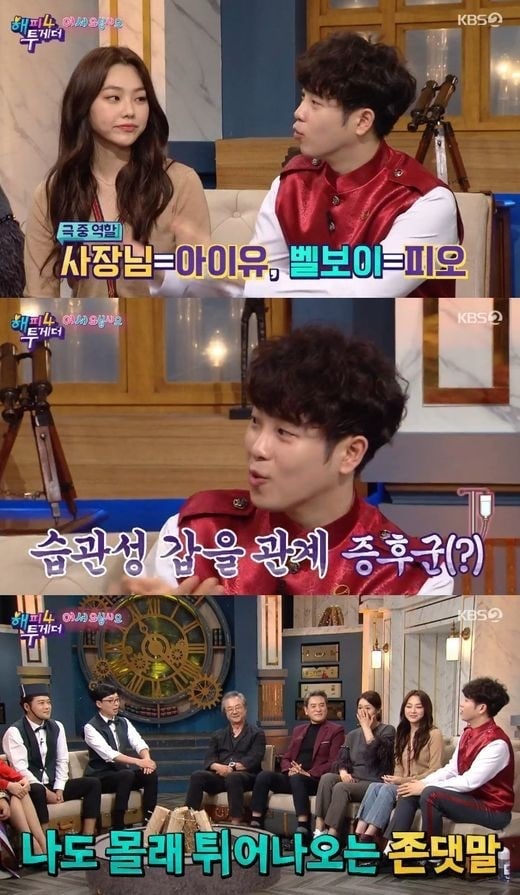 The MCs then called IU and filled her in on how Jung Dong Hwa joined “Hotel Del Luna.” She replied, “I didn’t know. I’m really moved. Jung Dong Hwan made four special appearances in my first lead drama ‘You Are the Best.’ It became so sincere while we were acting together. If I had a crying scene, I looked at a picture of him until the end of drama.” Jung Dong Hwan then told her, “I know you’re doing well now, but I hope that you’ll do even better from here on out and become a great actress.”

In response to Mina’s story, IU commented, “She was my No. 1 pick during ‘Produce 101.’ Her passion seemed really good.” About her and P.O’s formal relationship, she said with a laugh, “It’d be more comfortable if there was an age gap, but it takes longer when we’re the same age.”

Check out an episode of “Happy Together” below: