On the October 12 episode of JTBC’s “Ask Us Anything,” Super Junior appeared as special guests for the show’s 200th episode special. 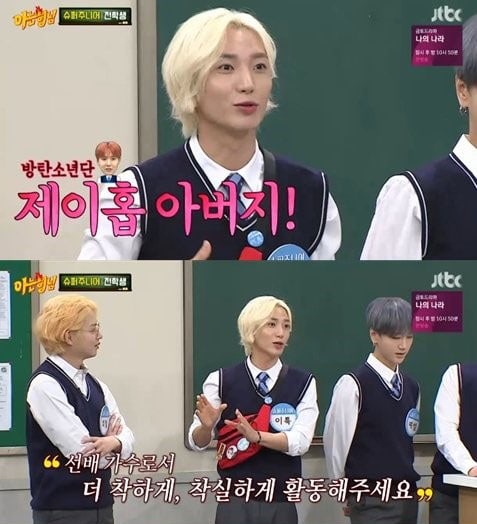 During the show, Kang Ho Dong commented, “Leeteuk is popular among parents because of EBS’s ‘The Best Cooking Secrets.’ Do older people recognize you often?” Leeteuk responded, “It’s amazing. When I go to the sauna, older people recognize me. One time, a man came up to me at the sauna near my apartment and said, ‘You’re Leeteuk, right? My son is a celebrity too. I’m J-Hope’s dad. Hobi [J-Hope’s nickname] loves Super Junior. Please continue promoting kindly and reliably so my son can work hard as well.”

Leeteuk continued, “The next day, some people approached me with a greeting again, so when I asked who they were, they replied that they were J-Hope’s mother and aunt. I’m not exaggerating! I’ve become friendlier with J-Hope’s parents. They even told me to come visit their home. [His mother] said she would cook me a meal. But I don’t have J-Hope’s number.” 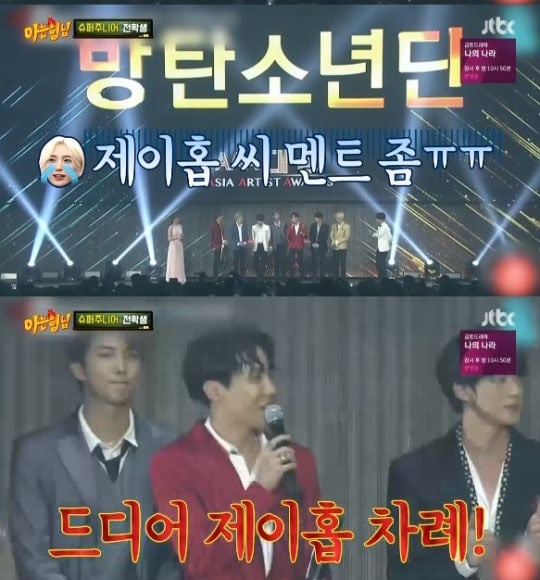 He also talked about sharing a moment with J-Hope during an awards ceremony he was hosting. Leeteuk remarked, “I was listening to BTS give their speech after winning a Daesang, but J-Hope was the only member who wasn’t able to give a comment. We were running low on time, but I thought, ‘Oh no! I’m close with J-Hope’s parents!’ so even though it was a live event, I asked him to say something anyways.”

Super Junior
BTS
J-Hope
Ask Us Anything
Leeteuk
How does this article make you feel?