On the October 12 episode of MBC’s “How Do You Play?” Yoo Jae Suk was busy with preparations for his trot debut. First, he met up with various trot veterans, including Tae Jin Ah, Jin Sung, Kim Yeon Ja, and songwriter Kim Do Il. 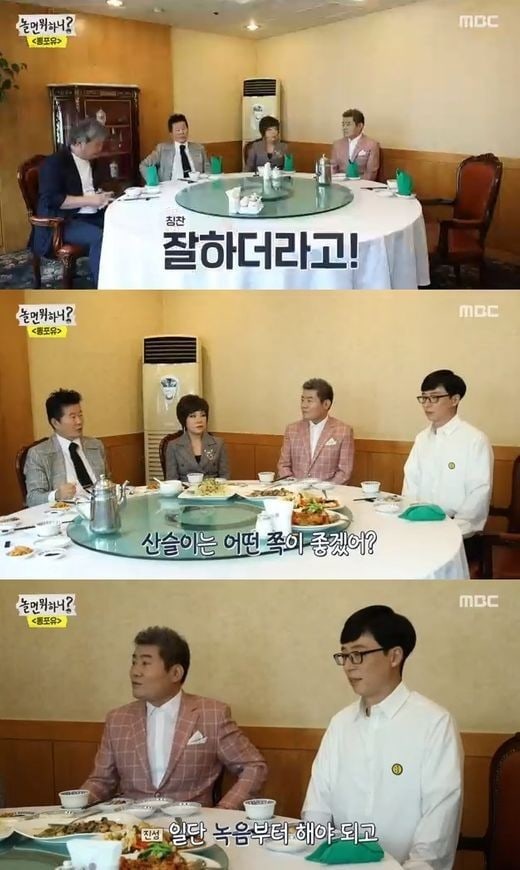 While awaiting Yoo Jae Suk’s arrival at a restaurant, the singers shared endless praise, making comments like, “Watching Yoo San Seul on stage, he was good,” “He performed without a prompter for lyrics. He wasn’t intimidated at all,” and “I thought that San Seul could really be a singer.”

Making his grand entrance, Yoo Jae Suk jokingly shared, “Since everyone keeps calling me San Seul, I’m really getting a reality check.” The four veteran singers shared that they had set up an agency for him, to which Yoo Jae Suk asked, “Can’t I just promote on my own?” Jin Sung explained, “These days, it’s the generation of entertainment. Your agency has to back you up.” 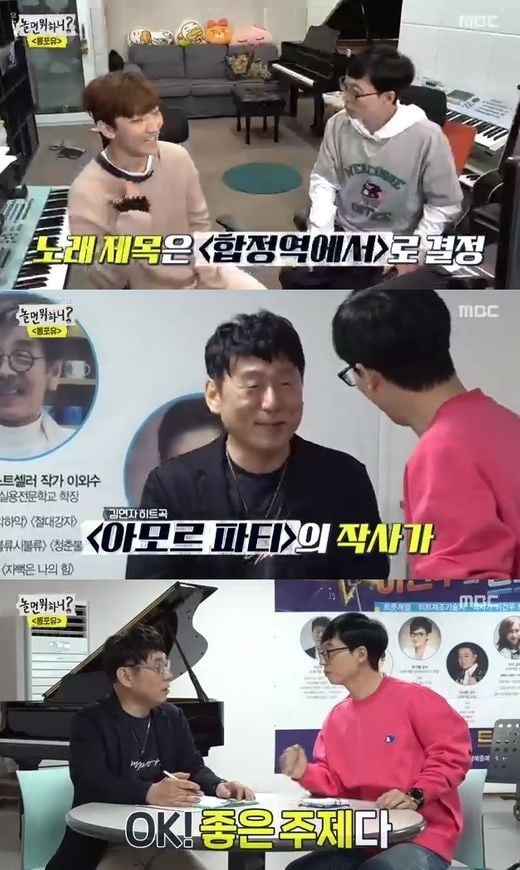 Later, Yoo Jae Suk met up with Jung Dong Hwan of MeloMance, with whom he discussed what kind of song he wanted to create. He revealed, “I want to sing a song that’s based on a subway station.” Jung Dong Hwan excitedly replied, “You came to the right place,” and suggested Hapjeong station. To continue working on the song, the two went to see lyricist Lee Gun Woo, who wrote Kim Yeon Ja’s “Amor Fati.”

To Lee Gun Woo, Yoo Jae Suk explained, “It’s the concept of parting ways at Hapjeong station. Even though they haven’t explicitly said they are breaking up, they both have the feeling that they won’t be able to meet after today.” After reading some of Yoo Jae Suk’s lyrics, Lee Gun Woo exclaimed, “If you’re this good at writing, why haven’t you done it until now?” The two decided on the title, “Hapjeong Station Exit 5,” and agreed to meet up after writing more. 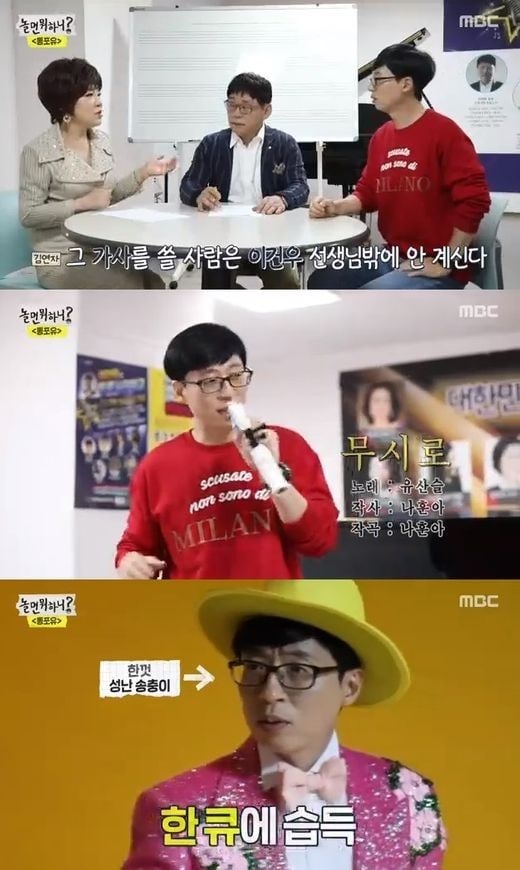 Accompanied by Kim Yeon Ja, Lee Gun Woo and Yoo Jae Suk met up and called lyricist Yoon Myung Sun, who has written tracks like Jang Yoon Jung’s “Oh My” and Super Junior T’s “Rokkugo.” Yoo Jae Suk suggested the idea, “Combining (hap) leads to affection (jeong), but why must we be apart?” creating a wordplay on the name of the subway stop and impressing the other singers.

Yoo San Seul also participated in a photo shoot under the supervision of singer Seol Ha Yoon. He appeared in a sparkly pink suit paired with a yellow hat and posed under the direction of Seol Ha Yoon, who told him, “You have to be a little greasy.”

Check out a preview of Yoo San Seul’s trot debut song below!