PSY has shared an update on what is ahead for HyunA and Hyojong!

On October 14, PSY shared individual profile images of the couple and spoke about them keeping their work lives separate from their relationship. Both of them are currently working hard for their comebacks, and he revealed that they have showed their competitive natures in the battle to release music first.

In response to PSY’s post, Hyuna promised to always do her best and jokingly asked which one of them would release their music first. Hyojong also vowed with determination, “I’m going to win.” 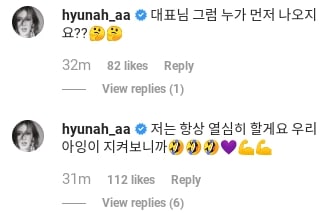 HyunA and Hyojong signed with P NATION, the entertainment label founded by PSY, at the beginning of this year. Both of them are preparing to release new music, and PSY recently shared a spoiler for HyunA’s potential comeback.

Dawn
HyunA
PSY
How does this article make you feel?