“9.9 Billion Woman” is about a woman named Jung Seo Yeon (Jo Yeo Jeong) who coincidentally gets her hands on 9.9 billion won (approximately $8.3 million) in cash and a man called Kang Tae Woo (Kim Kang Woo) who meets Jung Seo Yeon while digging up the truth about his younger sibling’s death. 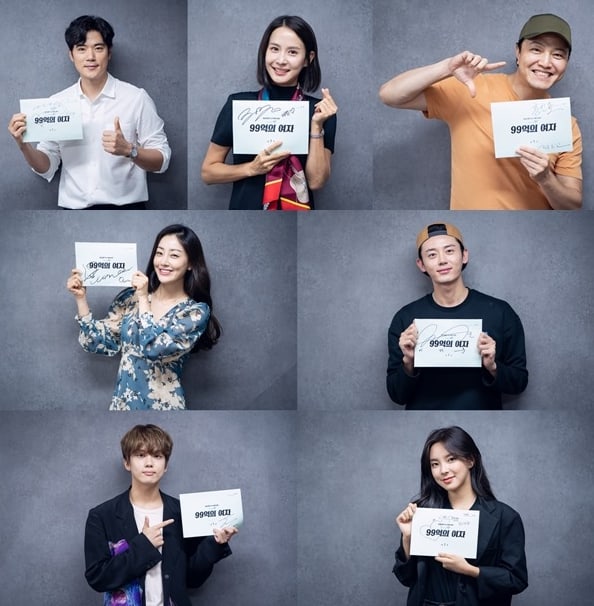 After introductions, the script reading started in a warm atmosphere with much laughter. First off, Jo Yeo Jeong showed her successful transformation into Jung Seo Yeon. Her character is a woman who left her family because of her father’s violence and got married. However, the happiness was short-lived, and after living a hopeless life, she ended up finding 9.9 billion won in cash.

As expected, Kim Kang Woo brought out his charisma as Kang Tae Woo, a former violent detective known as the “crazy cow.” Kim Kang Woo effectively wielded his character by controlling his tone to portray the different sides of him.

Jung Woong In immersed himself in his role as Hong In Pyo, the husband of Jung Seo Yeon. He impressed everyone with his witty ad-lib performance of an obsessive man. On the other hand, Oh Na Ra confidently took on her role as Yoon Hee Joo, Jung Seo Yeon’s beautiful and affluent friend who is very confident in herself. Lee Ji Hoon transformed into Lee Jae Hoon, the director of Woon Am Foundation and Yoon Hee Joo’s husband who’s great at putting on a show as a husband.

Also, Youngjae took on his first role in a traditional drama by acting as Kim Seok, who works at the internet cafe managed by Kang Tae Woo. Although he seems ordinary, he’s a computer fiend who’s been widely known for his skills in hacking since his middle school and high school days. Shin Su Hyun also impressed the cast and crew with her acting transformation into the bartender Ji Ha Na, who comes to like Kang Tae Woo after receiving help from him.

The production crew stated, “As expected, they are hard-working actors. Everyone was so absorbed in their acting that they didn’t know the time was passing.” The actors commented they were happy to work with a great cast and crew and said they’re looking forward to creating a great result.

“9.9 Billion Woman” will premiere in November.