Contestants from “Idol School” talked about their experiences on the show when they appeared on the October 15 episode of “PD Notebook.”

This broadcast examined the survival programs produced by CJ ENM, including shows such as Mnet’s 2018 program “Idol School” and the “Produce 101” series.

The show first visited the home of the father of Lee Hae In, who appeared on both “Produce 101” and “Idol School.” Her father wrote a post about her experiences that he shared online recently. He explained to “PD Notebook” that he’d been motivated to make the post after seeing articles about the alleged manipulation of “Produce X 101.”

Lee Hae In also sat down for an interview with “PD Notebook.” Lee Hae In recently posted a long letter detailing the poor conditions and mistreatment on “Idol School” as well as issues with her contract.

She told “PD Notebook,” “At first, they told me not to go to the audition venue where the 3,000 people were trying out. They told me ‘You don’t need to go,’ so I wasn’t preparing. But the day before filming, the writer in charge told me that I needed to go because I was relatively well known.”

She went on to say that if the contestants were asked where they’d auditioned, they wouldn’t be able to reply because they hadn’t auditioned. She said that most of the 3,000 people who auditioned had just been used for the show.

Another anonymous contestant shared that she’d been told by the production team to say that she’d gone to the auditions with 3,000 people, but she hadn’t really been there.

Lee Hae In also went into more detail about the room that the contestants slept in together. “The pink lodgings that were shown in the studio were very recently constructed, so the paint smell was very strong and the ventilation there wasn’t good,” she said. “If you shook a blanket once then a huge amount of dust would come out. It was to the point that girls with sensitive skin got red skin diseases all over.” 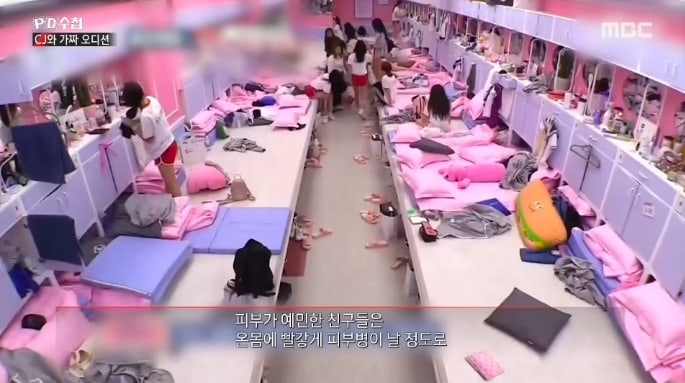 More contestants talked about the harsh conditions that the contestants experienced while filming, without revealing their identities. “There were girls there who were just 12 years old,” said one trainee. “They’re still growing so don’t they have to eat? They’d cry because they weren’t given food. My head hurt and I’d think, ‘What kind of filming set is this?’ There was one point in the middle when some people broke a window and escaped. They were so stressed out from being locked inside that they broke the screen and glass and escaped.”

Another commented, “My health got worse and I didn’t get my period at all.” They stated that other contestants also didn’t get their period, or they had bloody discharge for as long as two months.

A producer of “Idol School” spoke to “PD Notebook” and said that the contestants had been eating very well, to the point that there were concerns about them gaining weight. When asked about allegations that the rankings in the show were manipulated, the source stated, “I’m not sure about that exactly because I wasn’t in charge of it. I don’t believe there was manipulation.” 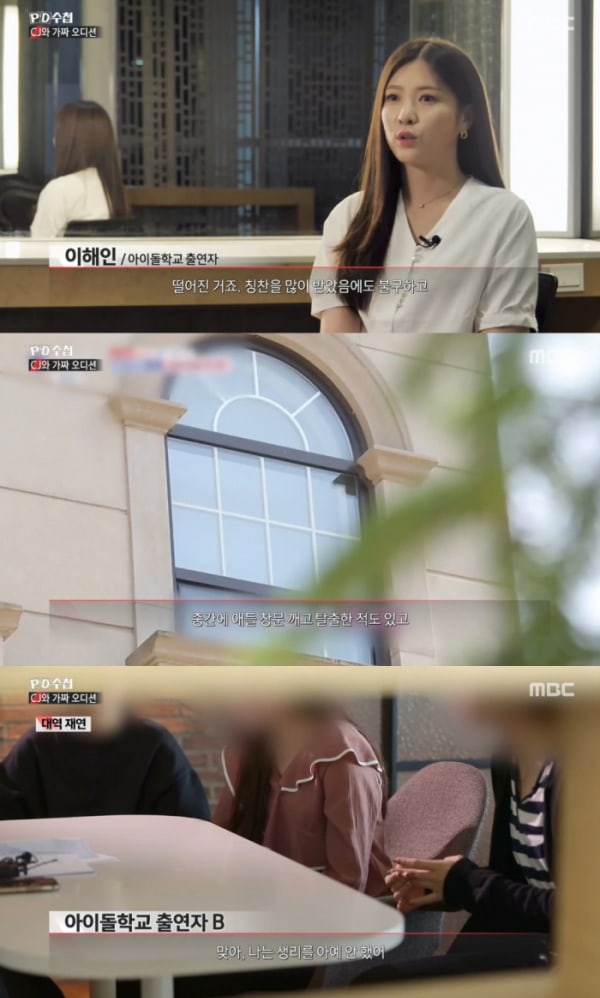 idol school
PD Notebook
How does this article make you feel?