“Psychopath Diary” is about a man named Yook Dong Shik (Yoon Shi Yoon), who coincidentally witnesses a murder and loses his memory after an accident that occurs while he is fleeing the scene. He wakes up with no sense of identity and mistakes himself as the psychopathic killer when he finds the murderer’s diary in his hands.

The teaser poster contains a mix of weapons and tools, from a gun and a saw to gloves and boots. It arouses curiosity with a mix of evidence showing that the owner of the items is a psychopath, but viewers may be puzzled because some objects seem to belong to a pushover, such as dog dental chews and an apron from a barbecue restaurant.

In the poster, there is a yellow circle around a red diary, and the caption describes it as crucial evidence. The words “The world has begun to fear the pushovers” is written at the top of the poster. 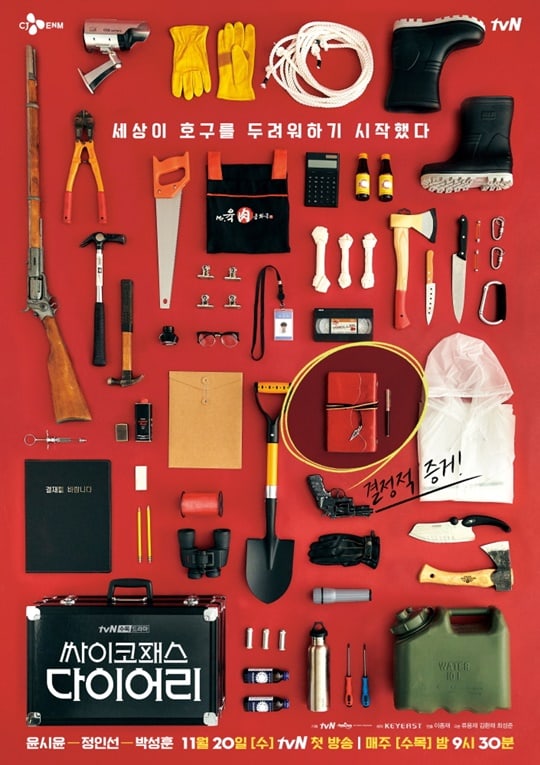 The production crew commented, “Pushover Yook Dong Shik was always pushed around, but after he comes to misunderstand himself as a psychopath, he will look at the world differently, and the other characters will start to fear the suddenly changed Yoon Dong Shik. The events will bring laughter, tension, and catharsis to the [small screen]. Please look forward to the first episode of ‘Psychopath Diary,’ which will air in November.”