HA:TFELT (Yeeun) has replied to a malicious comment on Dynamic Duo member Choiza’s Instagram following the passing of his former girlfriend Sulli.

On October 14, a netizen left a comment on Choiza’s Instagram asking him why he did nothing when Sulli left her group and took a break from activities, and the commenter criticized him for not guiding her to prioritize work before love. They asked Choiza if he knew that she was being harassed by malicious comments online when he was busy bragging about dating her on TV. The netizen concluded the comment by expressing their hope that Choiza would no longer be considered as a hero and that women would no longer be used as an “accessory of success” among people in hip hop.

You wrote this comment while pretending to be wise, but do you know how pathetic what you’re saying is? Sulli wasn’t an inexperienced person who needed to be guided; she was a respectable adult and an honest person who was true to her emotions and thoughts. The problem wasn’t the sincerity of their love for each other, it was the malicious commenters who looked at the relationship of these two people with bias, said unspeakable things, and were envious and obsessed. Why was a culture created where people in hip hop view women as an accessory of their success? It’s probably because of society’s perspective where women are seen as accessories of men. Instead of seeing women as independent entities, they suppress their rights and quiet them while defining them as someone’s woman, someone’s wife, and someone’s mother. How does society act towards men? The man should’ve helped her, the man should’ve led her, the man should’ve stopped her—Does a woman’s decision have to be dependent on a man? What is your view on relationships between men and women? Is man the sky and woman the earth? Freedom of speech is a good thing, but be aware of the time and place. Write your shallow thoughts in a diary or in a KakaoTalk chatroom. Don’t throw salt at someone who’s in an unspeakable amount of pain. You don’t have the right to do that. 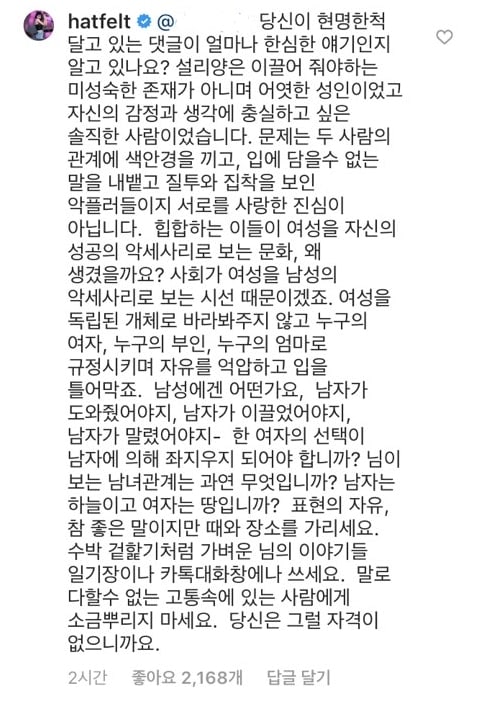 Sulli and Choiza publicly dated for about two years and seven months starting in 2015. Choiza has since turned off comments on his Instagram after being inundated with comments following Sulli’s passing.

HA:TFELT (Yeeun)
Choiza
Dynamic Duo
Sulli
How does this article make you feel?